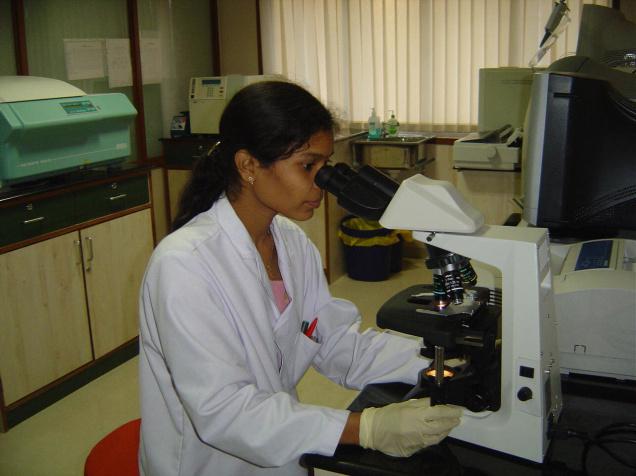 A researcher working in the safety laboratory at the Tuberculosis Research Centre, Chennai where the Phase I prime-boost AIDS vaccine trial was conducted. — Photo: TRC

The preliminary results of the Phase I prime-boost AIDS vaccine trial started in February 2009 and conducted at the Tuberculosis Research Centre (TRC), Chennai and the National AIDS Research Institute (NARI), Pune, has shown that the vaccine used is safe and its ability to elicit immune response is modest.

The vaccine trial used ADVAX, a DNA-based vaccine, as the prime and Modified Vaccinia Ankara (MVA) as the boost. ADVAX was earlier tested in the U.S. and found to be safe. Similarly, MVA vector, which was earlier tested at TRC in 2008, showed that the vaccine was safe.

As on date no serious adverse events were reported by any of the total of 32 volunteers recruited for the trial at both TRC and NARI. Based on this, it can be said that the vaccine is safe.

However, one more volunteer visit in December is pending at both trial centres. The trial is considered to be complete after this visit and some tests are done to know certain aspects of the immune response. The final results are expected by early next year.

Both centres have seen 100 per cent volunteer retention till date.

Group B volunteers received three of MVA (MVA was used as a prime as well as a boost).

However, on the whole, the magnitude of the immune response produced was only modest and did not sustain for very long. A vaccine can be called efficacious when the immune responses are seen in a large number of volunteers and are persistent.

Will the responses been better if a higher dose of MVA was used? “We feel that as we are using the prime-boost strategy, selecting the lower dose for boosting makes more sense. In combination strategies, using lower dose is likely to reduce harm, increase safety and optimise immunogenicity,” said Dr. Sanjay M. Mahendale, Deputy Director, and the Principle Investigator of the trial at NARI.

“We found the responses to be better when [volunteers] were primed by ADVAX followed by MVA,” said Dr. Ramanathan. “But how good the priming has been will be known only when the final, unblinded results come out,” he said.

However, ADVAX by itself produced very few immune responses. “We now know from various experiments (on animals and humans) that, in general, DNA vaccines by themselves are better at priming than being good ‘stand alone’ immunogens,” explained Dr. Ramanathan.

The results mentioned here are however based on preliminary, blinded data. “We have one more volunteer visit and additional immunogenicity tests pending. We have to wait for these to be completed before drawing firm conclusions,” he cautioned.

But would the responses been different had the Group B volunteers received two doses, instead of one, of MVA prime? “It is very unlikely that the level of immune responses would go up once the immune response reaches a certain level when the same vaccine is used as both prime and boost,” said Dr. Ramesh Paranjape, Director of NARI.

According to Dr. Paranjape, the breath of the response and the level of response are unlikely to go up at the end of the trial. “Scientifically, it can only go down,” he said.

So what lessons can one learn from the current trial at TRC and NARI? “This trial re-establishes the safety of the MVA as a vector, and prime-boost regime is a viable strategy and this strategy should be continued to be evaluated,” said Dr. Rajat Goyal, Country Director, International AIDS Vaccine Initiative (IAVI), New Delhi. The trial was funded by IAVI.

He also emphasised that use of the MVA as a vector and prime-boost regime as a strategy should not be dropped.

YRG Care, Chennai recruited volunteers for the TRC arm of the trial. “Recruiting volunteers was easier this time,” said Dr. Suniti Solomon, Director of YRG Care. “There is more literacy in the community we are working with and the experience of the earlier trial [at TRC] made it easy.”