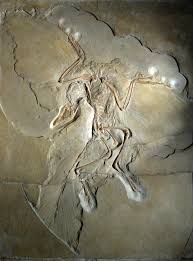 The discovery of Archaeopteryx , the most primitive bird fossil, in 1861, just two years after the publication of Charles Darwin’s great work, On the Origin of Species , could not have been better timed. Exhibiting both dinosaur features and typical bird-like ones such as feathers, wishbone, and three-fingered hands, the 150 million-year-old transitional fossil became the first textbook specimen with the fundamental traits of evolution in progress. The discovery, which played a vital role in our understanding of bird origin, provided the much-needed boost to palaeontologists for unearthing other vital links in the dinosaur-bird evolution chain, and other transitional forms. But even as scientists are celebrating the sesquicentennial anniversary of its discovery, the iconic specimen has been robbed of glory by a paper published recently in Nature. The Xiaotingia zhengi species reported in the paper, which has morphological features similar to Archaeopteryx and other confirmed deinonychosaurs — bird-like dinosaurs that are outside the avian lineage — has dethroned the iconic fossil from its high pedestal and clubbed it along with other non-avian dinosaurs. Indeed, the discovery of a few non-avian dinosaur fossils during the last decade served as a harbinger of things to come. These fossils, exhibiting the same avian morphological features seen in Archaeopteryx , raised serious doubts about the basal fossil’s very presence in the evolutionary tree of birds. Clinching evidence from the latest find has only confirmed these doubts.

While the dethroning will be hotly debated in scientific circles, the real battle will be fought between creationism and evolution. Creationists, who still claim there are no true transitional forms, are sure to exploit the latest development to propagate their unscientific and obscurantist views. The presence or absence of transitional fossils that show the intermediate stages of evolution from the ancestral form to its descendants has been a bone of contention between the two camps. It is true that all the intermediate varieties have not been preserved in the rocks. Still, scientists have found an abundance of important transitional evidence. The latest is the 2004 discovery of Tiktaalik — the transitional fossil between aquatic and land animals. These finds disarm the creationists from using, in Darwin’s own words, “the most obvious and gravest objection” to rubbish his theory. To think that the theory of evolution is on shaky ground due to the removal of Archaeopteryx as a basal bird is nothing but absurdity.