by Prasad RavindranathPosted on January 7, 2016 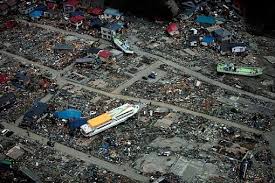 The 9 magnitude Tohoku-Oki earthquake that struck Japan on March 11, 2011, and triggered the deadly tsunami, was more powerful than expected. The magnitude of quakes in this region has been around 7-8 in recent centuries. Papers published recently in Nature and Science journals reveal why the quake off the Sendai coast turned out to be deadly. Though the fault north of Tokyo was assumed to be fairly simple and uniform in nature, the March 11 event showed how complicated it was. In the Japan Trench, the subduction (diving) of the Pacific Plate under the Okhotsk Plate occurs at an average rate of 8-8.5 cm a year. The subduction, it now turns out, has not been smooth. The plates had apparently got stuck (locked) at certain portions along the fault. Since the plates are converging, any locking of the plate interface produces an enormous build up of strain. Seismologists had presumed that the relatively soft material of the seafloor near the Japan Trench could not support a large accumulation of strain. Hence any failure of the fault and the resulting strain release was expected to produce only large earthquakes, not a 9 magnitude killer quake. However, enormous energy was released on March 11 owing to the sudden slip of a compact area (400 km in length and 200 km in width) of the plate interface. The epicentre had moved seaward by as much as 24 metres and lifted upward by about 3 metres.

Only two of the five ruptured segments had experienced an extreme slip. But this increases the possibility of very high magnitude quakes striking the southern portion of the fault due to stress transfer. The consequences could be severe if this portion of the fault has also been locked. If predicting quakes with a high degree of confidence is not possible in the case of land-based faults, scientists are far worse off when it comes to subduction zones located in the deep ocean. The lack of sea-based instruments to measure strain build-up is a huge limitation. Though Japan had a handful of sonar transponders located on the seafloor near the Trench, measurements were not taken frequently, notes a paper published recently in Nature. Vital information collected at regular intervals before the deadly quake could have minimised the loss of human life. Unfortunately, this was not done as collecting data from the sonar transponders is prohibitively expensive. The March 11 event should prompt the scientific community and governments to find cheaper and more efficient ways of obtaining critical information.