by Prasad RavindranathPosted on January 11, 2016 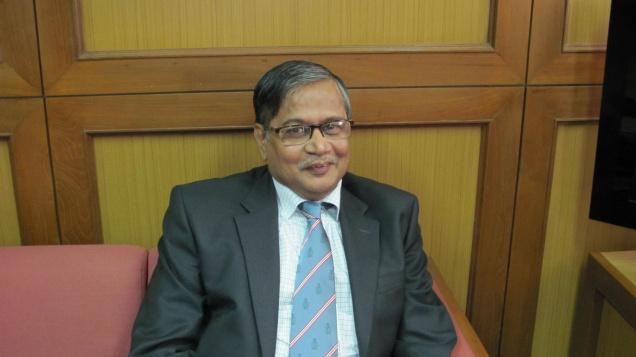 ‘India is one of the countries doing a lot of work on a scientific solution to waste management,’ says Dr. Sekhar Basu, Director of the Bhabha Atomic Research Centre. = Photo: R. Prasad

Post the Fukushima disaster, one of the key issues protesters raise is nuclear waste generated by a nuclear plant and its final disposal. Sekhar Basu, Director, Bhabha Atomic Research Centre (BARC), Mumbai, has worked extensively on several aspects of nuclear reprocessing and waste management. As Chief Executive of the Nuclear Recycle Board, he is responsible for the design, development, construction and operation of nuclear recycle plants involving reprocessing and waste management. He has designed and built reprocessing plants, fuel storage facilities and nuclear waste treatment facilities at Trombay, Tarapur and Kalpakkam. He has taken up the design of the first Integrated Nuclear Recycle Plant which will take the nuclear recycle programme to maturity. He spoke to R. Prasad about nuclear waste generation, reprocessing and final disposal. Excerpts.

What is the amount of nuclear waste generated compared with coal power plants?

The nuclear energy programme will move in parallel paths. One is to produce power. Since we generate power there will be some waste. And this waste is only two to three per cent of the total fuel we put into the reactor. Entire spent fuel is not waste; plutonium and uranium are recycled which contribute to about 97-98 per cent of the spent fuel. So only the remaining two to three per cent of spent fuel is waste. This is unlike our coal power stations where whatever coal you put into the plant turns into waste (like ash) and other emissions.

But will not nuclear waste remain radioactive for a long time?

So we are working towards the development of a process where we can separate waste that becomes non-radioactive within 300 years.

At what stage of development is the technology to separate waste which is radioactive for about 300 years and that beyond 300 years?

A pilot plant will become operational [to separate the two types of waste] next year. Process development in the lab was completed some time back. The pilot plant will be followed by a demonstration plant, and then by commercial plants.

Where is the pilot plant coming up?

When will the demonstration plant come up?

In our case, after the pilot plant is fully operational, we will come up with a demonstration-scale plant at Tarapur. It is at a design stage and will be integrated to the nuclear recycle plant at Tarapur. This will be a large-sized plant. The plant will be designed for reprocessing 600 tonnes of spent fuel.

How do you take care of the waste that will become non-radioactive within 300 years?

Taking care of the waste that remains radioactive for about 300 years is not of much concern. Properly designed buildings and structures can stand for 300 years.

The waste is first vitrified in the vitrification plant operational in India. It will be put in steel canisters, which in turn will be put in steel over-packs. Over-packs will again be put in another steel casing. So there will be three to four layers of steel casing in addition to vitrification. It will finally be kept in concrete structures/buildings. Concrete buildings are used for structural, shielding and ventilation purposes.

Whereas when it is beyond 300 years some other methods are necessary. That is why we talk of putting them in repositories.

So the waste that becomes non-radioactive within 300 years will not go into repositories?

No, that is not essential if we are able to separate it from the long-lived ones.

There is waste; there is long-lived radioactive waste. But it is a very small quantity. So taking care of that should not be much of a problem.

Have you identified a location for repositories for waste that will be radioactive beyond 300 years?

We need to identify a site and people should be convinced that there is no real problem. Then this will be possible. Today somehow the atmosphere is different. We can only continue our research for identification of a location.

So anywhere you have granite rocks of proper quality, they will be studied. During the studies, you look for some evidence for lack of migration. So you take a rock sample and see for water or other elements that have stayed over there for a very long time.

Is there another way of handling long-lived radioactive waste?

We can bombard the waste with high-energy neutrons to kill or burn radioactive elements. This is called transmutation. Transmutation is the way of handling actinides that have long half-lives. It can be done either in faster spectrum reactors where neutrons of higher energy are used or accelerator-driven system (ADS).

What do you mean by burning?

Burning means you bombard radioactive elements having longer half-lives with high-energy neutrons and convert them into some other elements that will have much shorter half-lives thereby mitigating the concerns of long-lived radiotoxicity. So if you have a large reactor programme, you can have a reactor specifically for burning the waste. It can be done either in fast spectrum reactors or an ADS. This is the scientific solution to waste management. India is one of the countries doing a lot of work on this.

How close are we to reaching this goal?

We already have fast reactors, so we will be only extending the technology. The ADS programme is being taken up in a big way in the 12th Plan. We have started pursuing it and Visakhapatnam is the place for the ADS programme. It will take 15 to 20 years to come up because multiple technologies are involved.

When will the Integrated Nuclear Recycle Plant come up?

Right now it is at a sanction stage; a proposal is with the government for sanction. Somewhere in 2020 the project should come up.

Our policy is to reprocess all the fuel that we put into a reactor. Reprocessing and waste management will follow the main reactor programme. There will be a gap of up to 10 years because the fuel has to take some time to cool. So far, the reprocessing programme was smaller, but we will expand it as the reactor programme is expanding.

Are you expanding the reprocessing plant capacity?

We are almost doubling the [reprocessing plant] capacity at Kalpakkam [near Chennai]. The Kalpakkam plant will reprocess fuel from [reactors based in] South [India] and is likely to be operational by 2014.