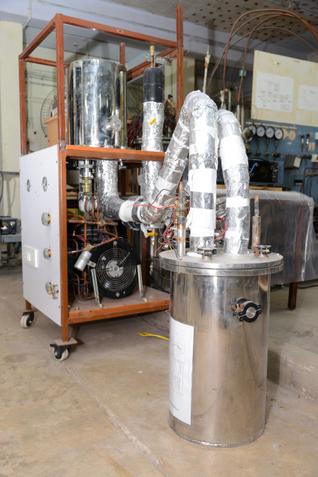 IIT Madras has achieved temperature as low as -200 degree C by using a single stage vapour compression refrigerator using a compressor that is routinely used in domestic refrigerators and air-conditioners. The working pressure of the compressor is nearly the same as in air conditioners. “The system was operated non-stop at about -200 degree C for three months,” said Prof. G. Venkatarathnam, Refrigeration and Airconditioning Laboratory, Department of Mechanical Engineering. His team has developed many other prototypes too.

It is indeed possible to achieve temperatures as low as -110 degree C by using a conventional cascade refrigeration system. In this, three refrigerators are arranged in a series and together help in bringing down the temperature in steps. “The disadvantage is that one compressor and a few heat exchangers are required for each stage. So the circuit becomes more complex and hence more expensive,” he explained. “And it is difficult to achieve temperatures lower than -100 degree C.”

A conventional refrigeration system uses a single liquid coolant that absorbs heat and becomes vapour at a constant temperature. “Our technology uses a mixture of coolants where the conversion of liquid to vapour occurs over a range of temperatures — 100 degree C or more,” Prof. Venkatarathnam said. “All this happens in an internal heat exchanger.”

The significance of his achievement becomes clear when the huge gap — from -110 degree C to -196 degree C — that exists between the vapour compression refrigeration system and those that use liquid nitrogen is considered. “For many applications we don’t need -196 degree C,” he said.

There are several applications where his system can be used. For instance, food preservation, preservation of biological tissues, long-term preservation of blood, in semiconductor industry to improve the vacuum levels, and finally, cooling of electronics — including telescopes and infrared sensors.

According to him, his system works based on four critical factors — thermodynamic process, the choice of coolant and concentration of each fluid in the coolant mixture, heat exchangers, and oil management.

Getting the right mixture of the coolants proved to be the biggest challenge. There are four to seven fluids mixed together in the coolant. “We pick and choose the fluids and their concentration from about 25 to 30 possible refrigerants to arrive at the right composition,” Prof. Venkatarathnam explained.

Oil management is also equally important and is quite challenging. Since the freezing temperature of oil used must be lower than the operating temperature, there is a compulsion to reduce or almost eliminate any trace of oil circulating in the system. Home refrigerators use oil that has a freezing temperature of just -50 degree C. The IIT team uses three approaches to prevent oil from circulating. One of the methods helps in removing oil “almost 100 per cent.” Another can decrease the freezing point of oil to -120 degree C.

“Our principles have been extended to develop a novel low cost nitrogen liquefier that can be used in veterinary hospitals for storing bull semen, in many scientific establishments and small industries that use liquid nitrogen to improve tool life,” said Prof. Venkatarathnam.