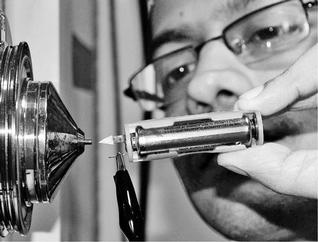 Rahul Narayanan of IIT madras and the lead author of the paper performs an experiment. – Photo: IIT Madras

Mass spectrometers that are as small as a smart phone and require as little as one volt — a 3,000-time reduction in potential — to create an electric field which would turn a sample into ions for identification of composition may soon become a reality.

The feat of shrinking the ion source that requires very little voltage was achieved by a team led by Prof. T. Pradeep of the Department of Chemistry, IIT Madras. The results were published last week in the Angewandte Chemie International journal.

Conventionally, a solution of the sample is electrosprayed at 3,000 volts to create charged droplets that become ions. The ions are, in turn, analysed to find the composition or chemical constituents in the case of a sample mixture.

The massive reduction in voltage requirement became possible by using carbon nanotube-impregnated paper to act as a substrate on which the sample was deposited. If the conventional method uses very high voltage to create a strong electric field, the sharp protrusions of the carbon nanotubes help in creating the high electric field by using very low voltage.

“One volt over a few nanometres creates an electric field equivalent to 10 million volts over a centimetre,” Prof. Pradeep explained. “The whole idea was to keep the nanotubes separated from each other. Normally they get bundled.”

Once nanotubes get bundled, they turn out to become large wire-like structures thereby increasing the voltage required to create an electric field. “Earlier experiments [by others] using carbon nanotubes failed as the nanotubes were bundled,” he said. In fact, standard procedures are available to disperse the nanotubes.

Incidentally, the order in which Prof. Pradeep’s experiment progressed was unusual. “I had been after this method for a long time. I knew ionisation is possible and can be detected using low voltage. But the answer came first,” he recalled. “I understood that by using the nanotube dispersion technique I could get ions. So the ions came first, and I looked at why this happened.” And he soon figured it out. “I realised that ions were observed as the nanotubes were separated,” he said.

“All good science is commonsense,” he noted. “When you look back, [the way] many science breakthroughs [happen] look simple… quite silly. But if you had told this [miniaturizing mass spectrometer] 20 years ago, people would not have believed you.”

A few puzzles remain to be solved. The researchers are yet to decipher where the samples get charged — along the entire length of the nanotube or just at the tip. It is also not clear why molecules present in the air don’t get ionised and create their own signals (technically called as noise).

“If you have a good vacuum system and controlled electronics, we can shrink a mass spectrometer to smart-phone size… we can simplify it. That’s the importance of this discovery,” he emphasised.

He foresees a day not too far away when gently rubbing the nanotube-coated paper on any object — an apple or a tablet — will be sufficient to collect samples for analysis in a lab. The nanotube-coated substrate can also be reused. In all, there is a real possibility of completely rewriting the way sample testing gets done.

“So what it means [is that] you can collect samples remotely and analyse them elsewhere for disease or pollution prevention or any such thing,” he noted. “In a sense, we can make a mass spectrometer reach a wider audience.” The mass spectrometer is a sophisticated instrument and has been out of bounds to the common man.

Producing a nanotube-coated substrate is also quite simple. Nanotubes can be grown separately and then coated on the substrate and, behold, it is ready for sample loading.

Since samples can be collected by gently rubbing the substrate on the material, there is a possibility of some tubes breaking and sticking to the surface of the material tested. Will such broken nanotubes cause any health hazard?

“We must ensure that the substrate is holding the nanotubes firmly, so no nanotubes stick to the sample tested,” he noted.