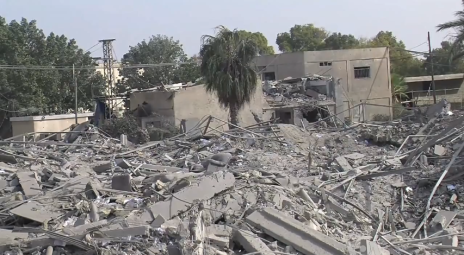 A strongly worded open letter signed by 24 doctors and scientists condemning Israel’s continued aggression of Gaza and the unspeakable atrocities committed on innocent people, including women and children, was published by The Lancet on July 22.

“We ask our colleagues, old and young professionals, to denounce this Israeli aggression. We challenge the perversity of a propaganda that justifies the creation of an emergency to masquerade a massacre, a so-called “defensive aggression”. In reality it is a ruthless assault of unlimited duration, extent, and intensity,” they write.

“They kill all the time and nothing is said about Israel,” Prof. Summerfield told this Correspondent over phone from London. “Israel has been given a special status by the West. Israel is not a normal country. It is intrinsically a part of the Western order… There is a collusion of the West in this crime.”

The strong emotions of the 24 scientists are reflected in the letter when they state: “We are appalled by the military onslaught on civilians in Gaza under the guise of punishing terrorists. This is the third large scale military assault on Gaza since 2008. Each time the death toll is borne mainly by innocent people in Gaza, especially women and children under the unacceptable pretext of Israel eradicating political parties and resistance to the occupation and siege they impose.”

Understandably, the overpowering condemnation by the small group of scientists has not been shared widely by scientists from Israel. “We register with dismay that only five per cent of our Israeli academic colleagues signed an appeal to their government to stop the military operation against Gaza. We are tempted to conclude that with the exception of this five per cent, the rest of the Israeli academics are complicit in the massacre and destruction of Gaza,” the letter states. But it does not end there. “We also see the complicity of our countries in Europe and North America in this massacre and the impotence once again of the international institutions and organisations to stop this massacre.”

Even as other communities have been mute spectators to the unspeakable violence and large-scale destruction of buildings, hospitals included, and the massacre of 558 innocents as of July 21 (149 of the 558 killed are children and 1,100 of the over 3,500 wounded are again children), the 24 doctors and scientists have voiced their protest when they state: “This action also terrifies those who are not directly hit, and wounds the soul, mind, and resilience of the young generation. Our condemnation and disgust are further compounded by the denial and prohibition for Gaza to receive external help and supplies to alleviate the dire circumstances.

“Gaza has been starved and squeezed for years,” Prof. Summerfield said. Israel and Egypt have enforced a blockade on Gaza. There is a restriction on movement of goods and people into and out of Gaza. As a result of the siege, the people in Gaza have been suffering from innumerable problems. “Gaza has been blockaded by sea and land since 2006. The blockade on Gaza has tightened further since last year and this has worsened the toll on Gaza’s population … No one from Gaza can leave from the only two checkpoints, Erez or Rafah, without special permission from the Israelis and the Egyptians, which is hard to come by for many, if not impossible.”

The letter paints a true picture of the massive humanitarian crisis that has been unfolding in Gaza Strip. “In Gaza, people suffer from hunger, thirst, pollution, shortage of medicines [and] electricity … Wounded and sick people cannot leave easily to get specialised treatment outside Gaza. Entries of food and medicines into Gaza have been restricted and many essential items for survival are prohibited. Before the present assault, medical stock items in Gaza were already at an all time low because of the blockade. They have run out now.”

They remove the veil of misinformation, myth and lies dished out by Israel when they state: “We denounce the myth propagated by Israel that the aggression is done caring about saving civilian lives and children’s wellbeing…

Among other lies, it is stated that civilians in Gaza are hostages of Hamas whereas the truth is that the Gaza Strip is sealed by the Israelis and Egyptians.”

“Gaza has been bombed continuously for the past 14 days followed now by invasion on land by tanks and thousands of Israeli troops. More than 60 000 civilians from Northern Gaza were ordered to leave their homes. These internally displaced people have nowhere to go since Central and Southern Gaza are also subjected to heavy artillery bombardment. The whole of Gaza is under attack.”

“Israel’s behaviour has insulted our humanity, intelligence, and dignity as well as our professional ethics and efforts. Even those of us who want to go and help are unable to reach Gaza due to the blockade. This “defensive aggression” of unlimited duration, extent, and intensity must be stopped.”

“As we write, other massacres and threats to the medical personnel in emergency services and denial of entry for international humanitarian convoys are reported. We as scientists and doctors cannot keep silent while this crime against humanity continues. We urge readers not to be silent too. Gaza trapped under siege, is being killed by one of the world’s largest and most sophisticated modern military machines. The land is poisoned by weapon debris, with consequences for future generations. If those of us capable of speaking up fail to do so and take a stand against this war crime, we are also complicit in the destruction of the lives and homes of 1·8 million people in Gaza.”

It is against this background that the small group of concerned scientists and doctors have written the bold letter in The Lancet. “Israel does not care about the hundreds of reports by UN agencies. But it is gradually concerned of the boycott campaign of Israeli goods in shops. There is a boycott campaign of Israeli academics as they have not spoken against the Gaza attack,” Prof. Summerfield said. The boycott movement is a slow one but it is symbolic nevertheless, he states.

Earlier during the day on Tuesday, several tweets from WHO highlighted the medical emergency in Gaza. It also released a status report on Gaza as of July 21. The tweets by WHO were:

“WHO & its health partners are gravely concerned about increasing attacks on health facilities, ambulances, personnel and patients in #Gaza.”

“WHO calls on all parties, individuals to respect, protect neutrality of health system, especially patients and health staff everywhere #Gaza.”

“Health-care providers & health emergency services must be protected at all times and permitted to carry out their work amidst conflict #Gaza.”

“Health facilities and patients must not be abused or targeted amidst conflict anywhere http://goo.gl/FjTs1M #Gaza.”

“Since escalation of violence in #Gaza reports indicate med facilities have been damaged, people & health profs have been injured, have died.”