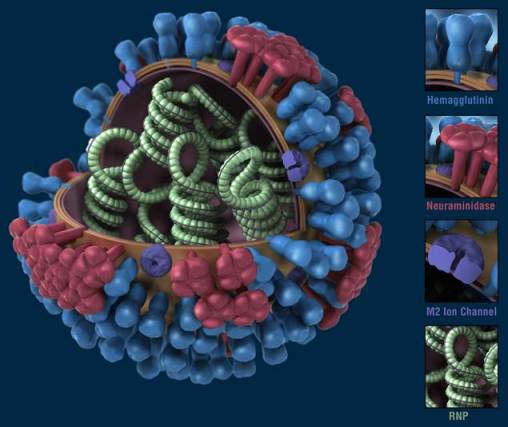 3D graphical representation of the biology and structure of a generic influenza virus. – CDC

The 2014 Indian H1N1 strain has undergone “important haemagglutinin (HA) mutations” that make it more easily transmissible and virulent in humans, notes a study published on March 11 in the journal Cell Host and Microbe. The result contradicts the claim made by the Pune-based National Institute of Virology (NIV) that the H1N1 Influenza A strain currently circulating in India has not undergone any mutation and is identical to the 2009 H1N1 pandemic strain.

A set of three amino acid mutations (K166Q, T200A and D225N) in the key flu viral protein called haemagglutinin or HA has been found in the 2014 Indian H1N1 strain.

While the T200A amino acid change improves the ability of the flu virus to bind better to a human lung receptor compared to that of the pandemic H1N1 strain, the D225N mutation has been linked to increased virulence and severity in those infected with H1N1. A previous study has shown that strains that possess the K166Q mutation are less reactive to 2009 H1N1 vaccine-elicited antibodies.

“Straight genetic analysis would identify these mutations; however, they need to be put into context,” Prof. Ram Sasisekharan, Koch Institute for Integrative Cancer Research, MIT and the corresponding author of the paper noted in an email to this Correspondent. “These changes [mutations] have been shown in some previous studies to play a very important role in virus transmissibility, and virulence and severity.”

Even in the case of HA sequences, India has deposited only two HA sequences last year (in July and August) in the database of the Global Initiative on Sharing All Influenza Data (GISAID) and none this year.

That only two HA sequences have been done and the results deposited in 2014-15 and no whole genome sequencing has been done despite the H1N1 infection spreading to several States, not only reflects the “poor surveillance” but also “potentially limits the response to a deadly outbreak.”

The HA and NA sequences will inform researchers on the vaccine strain selection and potential for mismatch. The HA sequence will also help in knowing the binding potential of the virus to human receptors. “However, sequencing the entire genome is important for tracking viral evolution and surveillance. Changes in proteins other than HA and NA have been linked to transmission, drug resistance and virulence,” he pointed out.

Since there is no information on the H1N1 strain(s) that are currently circulating in India, it is not possible to be “certain that the two 2014 viruses are still in circulation or have further mutated and are causing the current outbreaks. We believe that the strain responsible for the current outbreak must be similar to the 2014 strains. However, this cannot be validated without sequencing of the virus from the ongoing outbreak,” Prof. Sasisekharan said.

Besides mutation, gene reassortment — where certain segments of the genome of different strains are exchanged — fast forwards the evolution of virus strains.

In the case of the 2009 pandemic H1N1 virus strain, segments of the genome from avian, human and swine influenza were exchanged. Though no reassortment seems to have taken place in the case of the 2014 Indian H1N1 strains, this can be confirmed only through whole genome sequencing.

According to him, the HA sequences from the 2014 Indian viruses show changes at 15 amino acid positions relative to the vaccine H1N1 HA. These changes have been at critical antigenic sites recognised by the vaccine-elicited neutralising antibodies.

“Based on this analysis, we believe the Indian strain responsible for the current outbreak is not the same as the vaccine strain,” he said.

Since 2010, WHO has recommended the same H1N1 pandemic virus strain for vaccine manufacturing across the world.

While there are discussions on updating the strain for H1N1 vaccine, it is not clear if it will be based on the strain now circulating in India. “It is unclear since we lack sufficient sequence information on the current circulating strains in India,” he said.