How the Sun and Earth warp space and time is represented here with a green grid. – Image: LIGO/T. Pyle

A century after Albert Einstein predicted the existence of gravitational waves, after decades of hard work to detect them directly and nearly four months of rigorous scrutiny of data, an international team of scientists, which also included researchers from India, finally detected the most elusive waves stretching and compressing the fabric of space-time.

In his theory of general relativity, Albert Einstein described space-time as a fabric permeating the universe. He proposed that space-time was not a rigid and static stage but is instead flexible, so much so that it can be distorted and warped as large masses move through it.

For instance, a bowling ball kept on a trampoline causes a depression in the fabric at the place it is kept.  The heavier the ball, the greater the depression will be. Gravitational waves are produced when objects accelerate.  For instance, if two bowling balls were set to roll around each other on the trampoline, the fabric of the trampoline would undulate and oscillate, like ripples on a pond. The bowling balls tend to lose energy as a result of causing these oscillations, and they would ultimately come closer and closer to each other and finally collide.

This is precisely what happened when the two black holes orbiting around each other collided and merged into a single massive black hole. The ripples in the fabric of space-time (like oscillations seen in the trampoline when the balls moved) caused by the orbiting black holes travelled outward as gravitational waves. 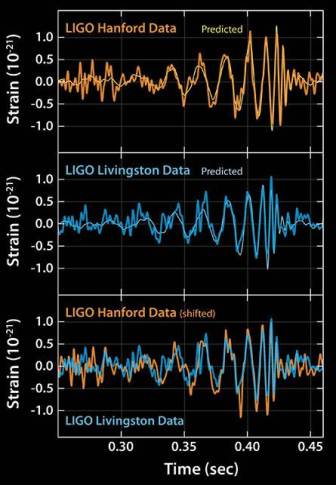 The two LIGO detectors registered identical signals (top and middle) almost simultaneously as gravitational waves from a black hole collision passed the Earth.  The measured signals also closely match with predictions of what such a signal should look like (bottom). – Photo: LIGO

According to the theory of general relativity, the pair of black holes orbiting around each other lost energy through the emission of gravitational waves.  As the holes lost energy, they were gravitationally drawn closer to each other.  As they came closer, the spinning became faster and they emitted even more gravitational waves and lost even more energy. By the end of 20 millisecond of data, they were whirling so fast that each orbit lasted just a few milliseconds; the black holes had whipped up to nearly the speed of light before colliding and merging into one bigger black hole.

“The total power output of gravitational waves during the brief collision was 50 times greater than all of the power put out by all of the stars in the universe put together,” Kip Thorne of Caltech, one of Laser Interferometer Gravitational-Wave Observatory’s (LIGO) founders, told New Scientist.

Though the black holes were 36 times and 29 times the mass of the Sun, the fused black hole weighed only 62 solar masses and not 65 solar masses.  The three solar masses that went missing were what created the gravitational waves.

While all objects emit gravitational waves when they orbit each other, including the Earth orbiting the Sun, only certain cosmic events — like the merger of neutron-neutron stars and two black holes moving around each other — can disturb the fabric of space-time with sufficient force to produce gravitational ripples that propagate through the Universe. According to Nature, the “Earth should be awash with such waves — but by the time they reach us, the disturbances that they produce are minute and cannot be detected.”

This is the first time that scientists have been able to observe a black-hole merger. The collision was such a violent event that it radiated more energy in the form of gravitational waves than all the stars in the observable universe emitted as light in the same amount of time, says Nature. The gravitational waves stretched space, making the entire Earth expand and contract by 1/100,000 of a nanometre, about the width of an atomic nucleus, notes Science.

The gravitational waves were detected at 11:50 a.m. Central European Time on September 14, 2015. It was a chance discovery made during the experiment’s first observing run.  The upgraded version, Advanced LIGO, was to officially begin collecting data only from September 18, 2015.

LIGO’s twin detectors located about 3,000 km apart at Hanford, Washington and in Livingston, Louisiana split a single laser into twin beams, and shoot each beam down a pair of perpendicular L-shaped listening devices 4 km long. The beams bounce back and forth off a series of mirrors in the long tunnels and ultimately return to the location where they were originally split. Since the beams are tuned to be in opposite phase they cancel each other when they meet; hence no signal reaches the detector. But very small changes in the relative distance travelled by the beams take place (down to smaller than one-ten-thousandth the diameter of a proton) when they encounter gravitational waves. One arm becomes a little longer than the other, and a moment later they switch – the shorter arm now becomes the longer one. This periodic stretching and squeezing of the arms continues until the gravitational wave has passed. Due to the difference in the distances travelled by the light in both arms, we get a periodic change in the intensity of the light coming from the detector. The two beams do not cancel each other completely and the signal reaches the detector.By looking at the output of such a sensitive interferometer, we can tell whether a gravitational wave has passed through it.

Everything we know about the universe comes from observations made through telescopes and particles of light. But unlike light, gravitational waves can pass through the universe unobstructed, so they carry information that we cannot obtain otherwise.

According to Nature, the ability to detect gravitational waves opens up the “new field of gravitational-wave astronomy”, in which scientists will now “listen to the waves” to know more about the objects that can produce them, including black holes, neutron stars and supernovae and directly study violent events like mergers of very massive and dense stars. Till LIGO came into the picture, neither black holes nor gravitational waves were directly detected.

Another significant possibility is the ability to explore the very early stages of the universe.  “These stages are impossible to study with light because the very early universe was so hot and dense that it was opaque to light,” Dejan Stojkovic, associate professor of physics at University at Buffalo said in a release. “But gravitational waves could freely propagate through the hot plasma of the very early universe, so scientists can use them to gain insight into what occurred during that otherwise invisible time.”

The frequency of these waves that LIGO is designed to catch are actually in the audible range of humans. It is possible to hear gravitational wave signals if the frequency of the waves is translated into sound waves. Physicists call it a “chirp” — a rise in pitch and volume as the black holes circle each other faster and faster. In this case, the two observatories had seen a wave resembling the chirp of a bird. “The oscillation began at 35 cycles per second (hertz) and rapidly increased to 250 hertz. It then became chaotic and rapidly died down; the whole thing was over within one-fourth of a second,” journal Science notes. The signal LIGO received of the black hole merger was played on speakers to audiences of eager scientists. The ‘loudness’ of the recorded signal also provides a rough measure of when the merger occurred.

Spotting the source of gravitational waves with very high degree of confidence and accuracy will become easier when more observatories are located in adifferent parts of the world. The observatory in Italy was not working when LIGO detected the signals. An interferometer is under development in Japan and India may have one too if the proposal to build one is accepted.

One thought on “Listening to the chirps of gravitational waves”