Making a marked departure from the conventional system, a Chennai-based company provides a comprehensive system that ensures that a 2 kW solar panel can power a 1.5 tonne air conditioner, one 300 litre refrigerator, five fans, five LED tube lights (4 feet in length and 16 watts each) and eight LED bulbs (6 watts each) during the day.

There are many innovative systems that make this possible.In lieu of silicon crystalline panels that are routinely used, Basil Energetics Pvt Ltd uses thin film solar panels. Though efficiency of thin film panel is the same as silicon panel at 25 degree C, the energy yield of thin film is higher than silicon panel.

“This is because power rating is done at 25 degree C. In India, the outside temperature far exceeds 25 degree C, especially during summer. And for every 1 degree C increase in temperature, the loss in power rating is 0.5 per cent in the case of silicon panels; it is only 0.25 per cent with thin films. So 5 per cent more energy output is achieved by thin film panels,” said Dr. R. Ramarathnam, Chairman of Basil Energetics. “Solar panels need light not heat. That’s why they are more efficient in higher latitudes.”

Basil Energetics also manufactures electrical appliances that run on both direct current (D/C) and alternating current (A/C). The driver circuitry designed by Basil and more efficient motors manufactured by the company are used in the air conditioner, refrigerator and fan. Also, the refrigerator and air conditioner use a motor that runs on a variable speed compressor. “Our fans consume only 20 watts [normal fans need 75 watts] and a 1.5 tonne air conditioner requires only 1,200 watts initially and then run at 250-260 watts. The average consumption is only 333 watts, while normal air conditioners always need 1,650 watts,” he said. “Our refrigerators consume only 40 watts, while conventional ones consume 150 watts.” 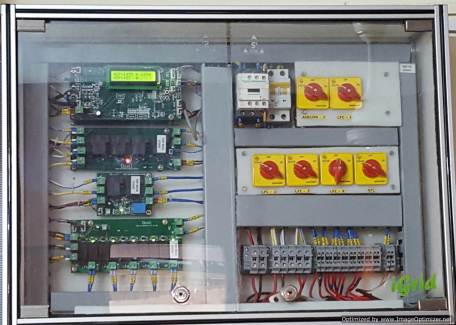 But the brain of the whole system is a smart grid (iGrid) that manages the load by monitoring the power availability in the panel on one hand and load demand on the other to ensure smooth functioning in four different scenarios. All appliances are run on panel-produced power when there is adequate power, but when the demand is higher than the power produced, the iGrid runs as many appliances as possible using solar power and the remaining from the grid. During the night, the iGrid draws power from the grid while excess power produced during the day (when all appliances are not used) is fed to the grid. “This management is done automatically,” Dr Ramarathnam said. “A battery can also be connected to the iGrid to run the appliances in the night.”

In the case of 2 kW capacity the investment would work out to Rs.4,20,000 for the panel, iGrid, and appliances and installation. “The payback period will be 5-5.5 years depending on usage and tariff,” he said. It works out to Rs.1,10,000 in the case of 330 watts that can power a 180 litre refrigerator, three fans, two tube lights and two bulbs.

The company has so far completed 24 projects in a short span of 13 months.