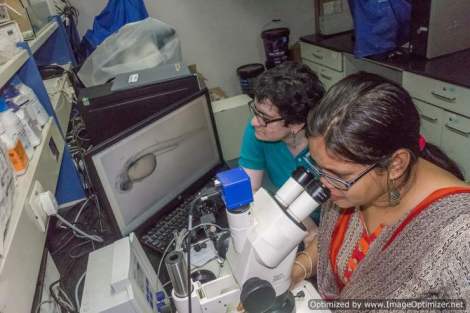 Scientists from the Delhi-based CSIR-Institute of Genomics and Integrative Biology are a step closer to bringing hope to children born with a rare disorder — CHARGE syndrome — if the results seen in zebrafish are reproducible in humans. The results of a study were published on July 13 in the journal Human Molecular Genetics.

About 1 in 20,000 people in the world, and an estimated 50,000 in India alone, are born with CHARGE syndrome — multiple life-threatening problems such as deafness and blindness, heart defects, genital problems and growth retardation and facial bone and nerve defects that cause breathing and swallowing difficulties. There is a high death rate in the very first year in children born with CHARGE.

A mutation in the CHD7 gene is responsible for 60-70 per cent of all CHARGE defects. The expression of the gene peaks in the early stages of embryo development, starting from 2-4 cells.

The team led by Dr. Chetana Sachidanandan from IGIB studied the fertilised eggs of zebrafish to better understand the CHARGE syndrome. Following fertilization, zebrafish embryos are transparent. This allows scientists to observe the inside of the embryo and watch in real time how various organs develop. Since most organs begin forming in the first 24-36 hours and are fully formed within five days, it allows researchers to study the development of an organism from egg to maturity.

An RNA injected into a one-cell embryo interferes with the making of the CHD7 protein, thus producing zebrafish embryos with very similar problems as human babies with CHARGE syndrome.

The researchers were able to find defects taking place at an early stage of embryo development as the zebrafish embryos are transparent. – Photo: Dr. Chetana Sachidanandan

“Looking inside the transparent embryos we found defects taking place at an early stage of embryo development. We discovered that zebrafish embryos had defects in the nerves of the digestive tract and myelination of peripheral nerves. These defects have not been previously noticed by doctors in CHARGE patients, most likely because such deep lying defects are not apparent on gross examination of patients. These findings mean that the doctors can now look specifically for these defects and thus provide better support to the patients,” Dr. Sachidanandan says.

But more importantly, the researchers found that the CHD7 protein causes CHARGE syndrome by modifying a second gene — sox10. “We found more sox10 protein. So if the CHD7 mutation was producing more sox10 protein, we wanted to know if we can reduce the defects by reducing the amount of sox10 protein,” she said.

And that is precisely what they achieved by reducing the amount of sox10 protein using RNA interference. “There was a dramatic reduction in the intensity of the defects,” she recalls. The defects in the facial bones and myelination (the process of surrounding the axon of some nerve cells with a fatty white substance that improves signal transmission/conduction) were reduced. “Since facial bone defects contribute to breathing and swallowing difficulties, we think reducing the facial bone defects could help a baby breathe and swallow better” she says. Similarly, an improvement in myelination will, in turn, lead to more efficient neuron functioning.

Though CHARGE syndrome is extremely complex with multiple defects, reducing the sox10 protein in CHARGE patients may go a long way in reducing their suffering and improve their chances of survival.

To that end, Dr. Sachidanandan and her team have already begun screening various drugs that can reduce the sox10 protein.