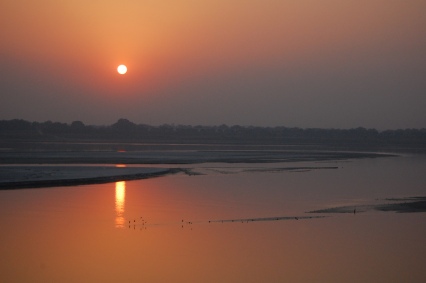 Though the water yield in the Ganga river basin has increased in recent years, the increase is not statistically significant.

A study carried out by a team of researchers from IIT Madras and IIT Bombay has found a decrease in spatial variability of mean monsoon rainfall over major river basins in India.

Though water yields in major deficit river basins such as Indus, Ganga and East Flow River-II have increased during the period 1976-2000 compared with the previous 25 years (1951-1975), the trend is not statistically significant, says Prof. Sachin S. Gunthe, the corresponding author of the paper from the Department of Civil Engineering, IIT Madras.

Ganga, which is a major water deficit basin, has seen significant increase in rainfall, while Yamuna, Krishna and Cauvery river basins exhibit a decrease.

There has been an increase in extreme rainfall events in India but this does not play a significant role in water availability as the surplus water gets wasted.

“Stable distribution of rainfall during the entire monsoon period is what is most desirable,” says Prof. Gunthe.

As a previous study had pointed out, the latest study has found that the amount of summer monsoon rainfall over Indian river basins does not support the paradigm “wet gets wetter and dry gets drier”.

The changes in rainfall pattern over major river basins in India raises concerns regarding the suitability and viability of interlinking major river water basins.

“The water demand in a surplus basin first needs to be assessed and then met under decreasing water availability scenarios before transferring water to deficit basins. Hence, planning for inter-basin water transfer [in order to supply water from surplus to deficit river basins] necessitates an immediate reassessment with a systematic approach,” they write.