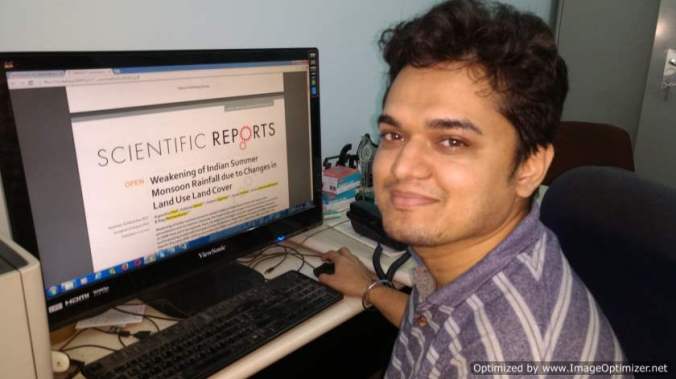 There is 1-2 mm reduction per day in rainfall in August and September in the Ganga Basin and northeast India due to deforestation, a study by Supantha Paul, the first author from IIT Bombay and others show.

Using satellite data and regional climate models, IIT Bombay researchers have found that deforestation (converting woody savanna to crop land) in northeast India and north-central India has led to a 100-200 mm reduction in summer monsoon rainfall in these two regions. The land use information is based on satellite data for two time periods — 1980-1990 and 2000-2010. The results were published on August 24 in the journal Scientific Reports.

During the initial phase of a monsoon, oceanic sources play a major role in bringing rain and charging the soil with moisture. But at the end of the monsoon period (August and September), evotranspiration from vegetation (also called as recycled precipitation) contributes to rainfall. Evotranspiration is a local moisture source for rainfall. Recycled precipitation contributes to 20-25 per cent of the total monsoon rainfall during the end of the monsoon and is very prominent in the Ganga Basin and northeast India.

“Because of deforestation, there is 1-2 mm reduction per day in rainfall during the end of the monsoon in the Ganga Basin and northeast India,” says Prof. Subimal Ghosh, the corresponding author of the paper from the Interdisciplinary Program in Climate Studies, IIT Bombay.

The impact of deforestation is not visible in peninsular India and western India. As a result of the large-scale conversion of forest land to crop land, particularly tea plantations in northeast India, there has been a 20 per cent reduction in green cover in the core monsoon zone. Also, the deep-rooted vegetation of the forest trees, which has a higher water intake capacity resulting in increased evotranspiration, has given way to more shallow-rooted vegetation.  These two factors have led to a reduction in evotranspiration and, in turn, rainfall at the end of the monsoon period.  According to an earlier study, deforestation across the global monsoon region showed an 18 per cent reduction in precipitation in India.

“Deforestation is present in peninsular India and western India too but recycled precipitation component is less compared with oceanic contribution.  So the impact is not visible in peninsular India and western India. In contrast, in the Ganga Basin and northeast India, recycled precipitation component is very high. So even a small change in vegetation cover in these two regions may cause a significant change in precipitation,” he says.

Changes in evotranspiration also affect the drying trend in India. “Over the last century, the warming of the western Indian Ocean led to a weakening of monsoon rainfall in India. In addition to reduced monsoon from distant oceanic sources, reduced recycled precipitation due to deforestation gets added up and causes severe drying in the Ganga Basin and northeast region,” Prof. Ghosh says.

In the Ganga Basin and northeast region, the recycling ratio (ratio of recycled to total precipitation) is very high due to monsoon wind circulation pattern. “Due to the Himalayas, there is internal wind circulation in these two regions and this causes the evotranspiration to convert into precipitation locally,” he explains.

“Recent studies show drying of Indian sub-continent due to warming of western Indian Ocean, and the condition would be more critical if the deforestation continues at the present rate. This needs to be seriously considered in the development of national policy of regional climate change mitigation,” Prof. Ghosh says.