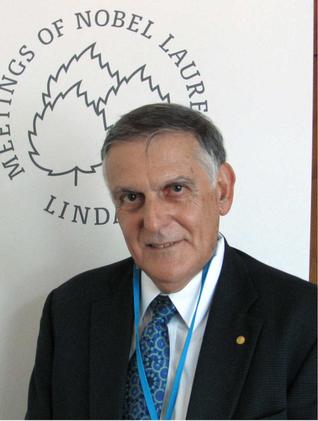 The Nobel Prize Series has launched a long-term India programme to stimulate students’ creative thinking and engagement in science. A memorandum of understanding was signed on September 5 by Nobel Media and the Department of Biotechnology (DBT) for hosting the Nobel Prize Series in India for five years.

The first will be held in January 2017 in Gandhinagar, Gujarat. It will coincide with the Vibrant Gujarat summit held by the State government. A trilateral agreement has been signed among the DBT, the Gujarat government and Nobel Media. The Nobel Laureates will be invited for discussions on the theme of ‘Vibrant Gujarat Science for Humankind’ and ‘Science as the Engine for Economic Growth’.

“Gandhinagar will host the main event and a five-week long exhibition on how the science underlying the Nobel Prizes has impacted our lives, while Delhi and Bangalore will host a few other events. The finer details will be finalised in the next few weeks,” K. VijayRaghavan, Secretary, DBT, tells me.

“We are thrilled to bring the Nobel Prize Series to India as part of our global outreach with the ambition of raising engagement in science, literature and peace in line with Alfred Nobel’s vision. This long-term commitment enables us to create great content and inspire people not only in India but around the world through our digital channels,” Mattias Fyrenius, CEO of Nobel Media, says in a release.

“The Nobel Prize Series will have some of the components similar to that of the Lindau Nobel Laureate Meeting. There will be major national exhibitions and conferences,” Prof. VijayRaghavan says. “The Noble Laureates will go to different universities and institutions, and students from different universities and institutions will attend the exhibitions and conferences.”

Unlike in the case of the meeting in Lindau, Bavaria, Germany, where the annual scientific conference is held in the same place every year, the Nobel Prize Series in India will be held in different States each year.

To begin with, the MoU is for five years, but it will be extended. In the case of Lindau, Laureates from one science discipline — medicine, physics or chemistry — are brought together for a few days to interact with students and research scholars who have been chosen from different countries. Students from India are regular participants.

“India’s bright students have a thirst for knowledge and its application to society. They are inspired by examples of excellence, but the opportunities for interacting with the best and the brightest are sadly far too little for a country of our size. The Nobel Prize Series will bring, through a major event and digital media, the world’s best scientists to every young girl and boy in India with an interest in science,” Prof. VijayRaghavan says.

A science enigma in Israel

Scientists should not be crucified for making mistakes: Nobel Laureate