The compulsion to improve the level of competence of private health-care providers with no formal training in rural areas has once again been highlighted by a survey of over 23,000 households in 100 villages in Madhya Pradesh

The results of a study were published on October 5 in the journal Health Affairs. 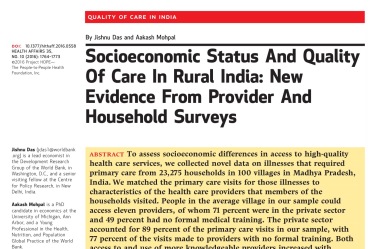 “Providing public care in scattered rural outposts is a very costly option. Even if the government were to staff these posts, the number of patients would be so low that doctors may effectively provide care to only five-six patients a day,” says Jishnu Das, a senior visiting fellow at the Centre for Policy Research, New Delhi and the first author of the paper. Imparting training to improve the competence of providers in the informal sector and providing villagers transport to seek care from health care providers located in larger towns are viable alternatives, the authors say.