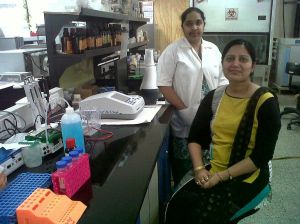 Researchers at Pune’s National Centre for Cell Sciences (NCCS) have identified a coumarin derivative for the treatment of cutaneous leishmaniasis. Since Leishmania donovani (which causes Kala-azar) and Leishmania major (which causes cutaneous leishmaniasis) share 95 per cent similarity in their genome, the coumarin derivative developed by the researchers may be used for treating Kala-azar as well.

“The focus of our study was on the development of oral drug candidates for the treatment of cutaneous leishmaniasis,” says Dr. Shailza Singh. Most of the drugs currently being used have side effects and are injectables. There is also a dearth of oral drugs that can be used for treating this disease.

In order to develop an orally administrable drug, the researchers used computer assisted drug designing in which computational tools were used to design and develop new drug candidates. A few of these selected compounds were screened in the laboratory.

A team led by Dr. Singh from NCCS used one of the coumarin derivatives on leishmania parasites for in vitro testing. “What we observed was that the treated parasites exhibited size reduction and morphological alterations and appear to lose their motility. The compound also inhibited the proliferation of promastigotes (a morphological stage in the development of the parasite).” says Dr. Singh.

One of the major handicaps of the derivate compound is its hydrophobic nature. To address this and to increase the efficacy of the derivative, the researchers encapsulated the compound in liposomes. Liposomes are spherical vesicles which enclose water droplets and are used as a vehicle for administering drugs.

“Liposomes, which are 150 nm in diameter, have the property of increasing the shelf life of drugs and enhancing hydrophilicity,” she says.

“We saw similar but enhanced effects when the compound was encapsulated in nanoliposomes,” says Vineetha Mandlik from NCCS and the first author of the paper. Also, the nanoliposomes, which released the compound in a slow and sustained manner — 93 per cent over a period of 50 hours, reduced the proliferation of parasites.

The researchers then tested the compound in mice having cutaneous lesions. The progression of infection was assessed in terms of the footpad thickness of the mice. “In the untreated mice we observed progression of infection in terms of scarring and ulceration and increase in footpad thickness. But no such symptoms were seen in the treated mice,” says Ms. Mandlik.

The beneficial effects in mice were seen even when the compound was administered orally at a dose of 5 mg per kg body weight. Earlier studies had used 5-6 times higher dosages of other drugs such as miltefosine.

“So the compound shows promise and may be considered for better and effective drug candidate generation,” says Dr. Singh. “Its therapeutic potential in treating leishmaniasis however needs further assessment.”

The team is looking for partners and collaboration to help develop gel-based formulation of the compound for in vivo study in mice. “The derivative is very effective and we want to take it forward for mechanistic study.” says Dr. Singh.