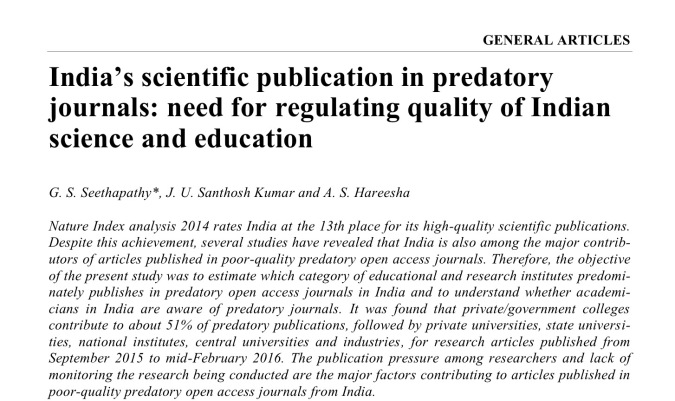 The paper published in Current Science exposes the practice of researchers from CSIR, ICAR, ICMR, IITs and NITs publishing in predatory journals.

India not only publishes the most number of predatory journals in the world but researchers based in India are one of the biggest contributors to such bogus journals; an earlier study found that researchers in India accounted for 35 per cent of publication in bogus journals.

Based on 3,300 papers published between September 2015 and mid-February 2016 and randomly chosen from 350 predatory journals, researchers found that 51 per cent of papers in predatory journals were published by researchers from colleges affiliated to universities and autonomous colleges. It was followed by private universities/institutes (18 per cent), State universities (15 per cent) and national institutes (11 per cent).  The results were published in the journal Current Science.

What is more surprising is that researchers from ICAR, CSIR, and ICMR labs, and national institutes such as IITs and NITs too published papers in such junk journals.  Of the 11 per cent publication from national institutes, ICAR labs had the most number of publications (17 per cent). It was closely followed by CSIR at 15 per cent, NITs at 11 per cent, IITs at 9 per cent and ICMR at 6 per cent.

“Among the State universities, Annamalai University in Tamil Nadu has the most number of papers (70) published in predatory journals, while at seven papers Banaras Hindu University (BHU) Varanasi has the highest number among the central universities,” says G.S. Seethapathy from the University of Oslo, Norway and the corresponding author of the paper. “The National Chemical Laboratory (NCL), Pune has 15 papers while the Delhi-based Institute of Genomics and Integrative Biology (IGIB) has 12 papers. Among the ICAR institutes, the Indian Institute of Horticultural Research, Bangalore (17) and the Indian Agricultural Research Institute, New Delhi (12) have the most papers in such journals. In the case of IITs, IIT Bhubaneswar has eight papers.”

Of the 480 researchers who responded to a questionnaire, 20 per cent claimed that they were unaware that their paper was published in a predatory journal. While 10 per cent said they knowingly published papers in these journals, the remaining 70 per cent were not willing to answer the question.

The publish or perish situation has now turned grave with pressure to publish becoming enormous for researchers both at the stage of appointment and promotion. In the study, 75 per cent of the respondents admitted that they were under “pressure to publish research articles”.

Due to this pressure, quantity and not the quality has become the focal point both for both researchers and for institutions. Predatory journals, which by default publish even the most ludicrous manuscript for a huge fee, have therefore come handy. It’s a win-win situation for researchers who are unable to do quality research and those publishing predatory journals. Little wonder that the number of predatory journals published from India is ever increasing. It is true that some researchers are genuinely cheated into submitting papers to such bogus journals but that number seems to be quite small.

“The introduction of academic performance indicator (API) by the University Grants Commission (UGC), lack of clarity in identifying and evaluating journals, the focus on ‘quantity’ over ‘quality’, unhealthy competition between peers, and overall, a favourable non-scientific publishing environment have led Indian researchers to publish in mediocre journals wherein most manuscripts are published without any peer review. Perhaps it is also the fear of peer review that has nourished predatory journals, making India one of the world’s largest base for predatory open-access publishing,” notes a September 2014 Editorial in Current Science.

“Universities need to re-examine the way they perform academic evaluation. They need to stop counting the number of one’s publications as a method for academic evaluation. This counting leads people to pay for easy publishing in predatory journals, and this, in turn, leads to a proliferation of predatory journals. The same would apply to government laboratories as well,” Prof. Jeffrey Beall, Scholarly Communications Librarian at Auraria Library, University of Colorado, Denver had told me earlier. Prof. Beall coined the term “predatory journal” and has prepared a long list of such journals which any serious researcher can refer to to avoid getting trapped.