A team of Indian researchers from the School of Life Sciences, Jawaharlal Nehru University and other institutions has successfully decoded the molecular basis of extreme fiery hot (pungency) property of Bhut jolokia (Capsicum chinense) which is native of northeast India; Bhut jolokia has the highest pungency level in the world.

In the study, many varieties belonging to C. chinense, C. frutescens, C. annuum were studied and comparative analysis carried out for pungency, vitamins and other metabolites. The high level of pungency and vitamins was found to be positively correlated with high antioxidant activities — the higher the pungency of the capsicum variety the higher was its antioxidant property. The results were published in the journal PLOS ONE.

“Pungency and vitamin C show high correlation, and these two along with other metabolites have high antioxidant activity,” says Sarpras M from the School of Life Sciences, JNU and the first author of the paper. “When we tested the extract on in vitro cell-free assays the highly pungent capsicum varieties showed very high potential for free radical scavenging activity compared with low pungent varieties. We compared capsicum varieties with low, moderate and high pungency.”

“We have now tested the effectiveness of the extract to scavenge free radicals in mice and cancer cell lines. We have got some encouraging results,” says Sarpras. 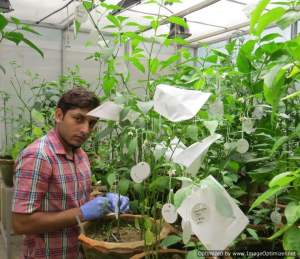 “The capsicum Bhut jolokia [popularly known as ghost chilli] has more anticancer property compared with other capsicum varieties,” Ajay Kumar from the School of Life Sciences, JNU and one of the authors of the study.

“The scavenging property is mostly useful in humans and animals as it neutralises the free radicals, which are otherwise harmful,” says Dr. Nirala Ramchiary from the School of Life Sciences, JNU and the corresponding author of the paper.

Seventeen varieties of C. chinense species had high pungency of over 0.9 million scoville heat unit, which is higher than what has been previously reported.

The team identified crucial genes involved in pungency development. A majority of candidate genes involved in capsaicinoid biosynthesis pathway showed many-fold higher expression in C. chinense species compared with C. annuum species. This suggests that the possible reason for the extremely high pungency seen in some C. chinense varieties “might be due to higher levels of candidate gene expression”. Variations in the pungency-related genes might also be causing variation in the level of pungency. “Around 10 metabolites which are precursors of capsaicinoid production pathway indirectly enhances the pungency,” says Sarpras.