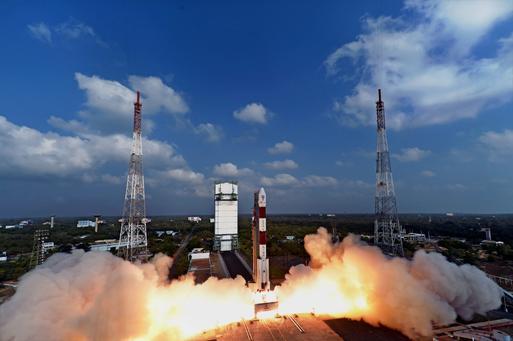 The Indian Space Research Organisation boosted its reputation further when it successfully launched a record 104 satellites in one mission from Sriharikota on Wednesday by relying on its workhorse Polar Satellite Launch Vehicle rocket. An earth observation Cartosat-2 series satellite and two other nano satellites were the only Indian satellites launched: the remaining were from the United States, Israel, the UAE, the Netherlands, Kazakhstan and Switzerland. Of the 101 foreign satellites launched, 96 were from the U.S. and one each from the other five countries. Till now Russia held the record of launching 37 satellites in a single mission, in 2014, while the National Aeronautics and Space Administration of the U.S. launched 29 satellites in one go in 2013. Last June, ISRO had come close to NASA’s record by launching 20 satellites in one mission. But ISRO views the launch not as a mission to set a world record but as an opportunity to make full use of the capacity of the launch vehicle. The launch is particularly significant as ISRO now cements its position as a key player in the lucrative commercial space launch market by providing a cheaper yet highly reliable alternative. At an orbital altitude of around 500 km, the vehicle takes about 90 minutes to complete one orbit. Though ISRO had sufficient time to put the satellites into orbit, it accomplished the task in about 12 minutes. With the focus on ensuring that no two satellites collided with each other, the satellites were injected in pairs in opposite directions. Successive pairs of satellites were launched once the vehicle rotated by a few degrees, thereby changing the separation angle and time of separation to prevent any collision.

ISRO plans to launch more Cartosat-2 series satellites and even an improved version. Besides setting the record for the most number of satellites launched in a single mission, the Indian space agency has launched two nano satellites weighing less than 10 kg. It is a technology demonstrator for a new class of satellites called ISRO nano satellites (INS). The main objective of the INS, which will be launched together with bigger satellites, is to provide a platform on which payloads up to 5 kg from universities and R&D laboratories, and ISRO itself can be easily integrated for carrying out scientific research activities. With many Indian universities already building and launching nano satellites, the availability of a dedicated nano satellites platform is sure to boost space research in India.
Published in the Hindu on February 16, 2017
Advertisement