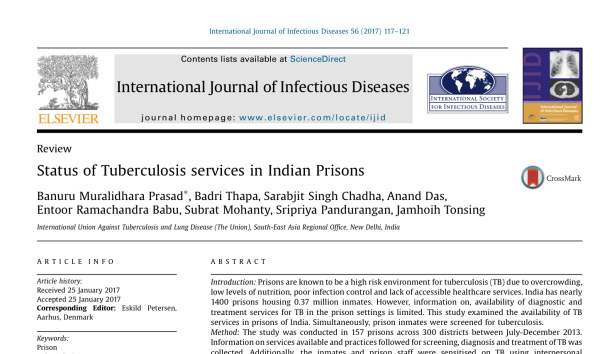 Screening, diagnosis and treatment of people with tuberculosis is “sub-optimal” in Indian prisons, says a study published recently. Only 79 prisons (50%) screened new inmates at the time of entry, and 92 prisons (59%) carried out periodic or regular screening. As a result, researchers from the Delhi-based International Union Against Tuberculosis and Lung Disease (The Union) were able to diagnose 80 new TB cases by screening nearly 5,100 prisoners. These people “could have been missed in the existing [TB testing] system” in Indian prisons.

The study was conducted in 157 prisons — central, district and sub-district — that housed 0.2 million inmates. There were 342 inmates with TB in 92 prisons when the study was carried out in 2013. The results were published in the International Journal of Infectious Diseases.

“Entry-level screening helps in identifying TB patients among those prisoners/inmates who are new in the prison. Regular screening identifies TB patients among those who have been in the prison for certain duration and are at higher risk [owing to prison conditions]. Our study indicates that entry-level screening alone is not sufficient to diagnose all TB patients in prisons and needs to be supplemented with regular screening,” Banuru Muralidhara Prasad from The Union and the first author of the study says in an email.

Entry-level screening is more in prisons which had a doctor and was the least in sub-district prisons. Though doctors are available in 129 (89%) prisons, only 65% were trained under the national tuberculosis programme.

India has 0.37 million inmates housed in 1,400 prisons across the country. Overcrowding, malnutrition, lack of infection control, to name a few makes prisons a high-risk environment for spread of TB. “Prisoners very often originate from the most vulnerable sectors of society. They already have an increased risk of diseases such as TB. In prison, these problems are amplified by poor living conditions and overcrowding, poorly ventilated spaces,” a 2001 WHO document says.

“Prisoners disproportionately come from disadvantaged backgrounds. They can, therefore, be at a higher risk of acquiring TB infection even before they arrive in prison, as well as of suffering from comorbidities, such as HIV infection, hepatitis and diabetes. Thus, prisoners are a key population to be covered by the End TB Strategy,” says the WHO’s  Ethics guidance for the implementation of the End TB strategy report.