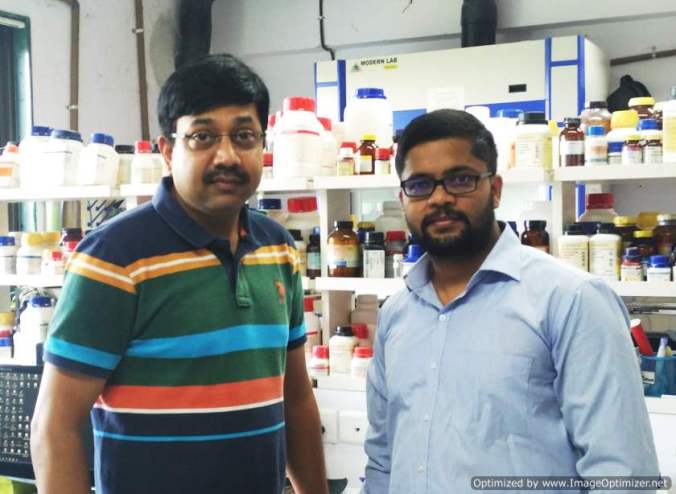 The quantum dots that Mukesh Kumar Kumawat (left) and Rohit Srivastava have fabricated can be used for bioimaging and temperature measurement.

Using mango leaves to synthesise fluorescent graphene quantum dots (nanocrystals of semiconductor material), researchers from the Indian Institute of Technology (IIT) Bombay have been able to produce cheap probes for bioimaging and for intracellular temperature sensing.

Unlike the currently used dyes, quantum dots synthesised from mango leaves are biocompatible, have excellent photostability and show no cellular toxicity. The results were published in the journal ACS Sustainable Chemistry & Engineering.

To synthesise quantum dots, the researchers cut mango leaves into tiny pieces and froze them using liquid nitrogen. The frozen leaves were crushed into powder and dipped into alcohol. The extract was centrifuged and the supernatant evaporated in an evaporator and then heated in a microwave for five minutes to get a fine powder.

Using mice fibroblast cells, a team led by Prof. Rohit Srivastava from the Department of Biosciences and Bioengineering at IIT Bombay evaluated the potential of quantum dots for bioimaging and temperature sensing applications. In mice cell in vitro studies, the graphene quantum dots were able to get into the cells easily without destroying the integrity, viability and multiplication of the cells. The quantum dots get into the cytoplasm of the cell.

The quantum dots, 2-8 nanometre in size, were found to emit red luminescence when excited by UV light. “Even when the excitation wavelength was 300-500 nanometre, the emission from the quantum dots was at 680 nanometre. The quantum dots exhibited excitation-independent emission,” says Mukeshchand Thakur from the Department of Biosciences and Bioengineering at IIT Bombay and one of the authors of the paper.

Since the quantum dots get into the cytoplasm of the cell, they can be used for cell cytoplasm labelling applications.The quantum dots have smaller and larger fluorescent units. When the excitation is at lower wavelength, the smaller units transfer energy to the larger units and there is red emission. And when the excitation is at higher wavelength, the red emission comes directly from the larger units, thus remaining excitation-independent.

“Since the quantum dots get into the cytoplasm of the cell, they can be used for cell cytoplasm labelling applications,” says Mukesh Kumar Kumawat from the Department of Biosciences and Bioengineering, IIT Bombay and the first author of the paper.

“Since the quantum dots emit red light, they can be used for making organic light-emitting diodes as well,” says Kumawat.