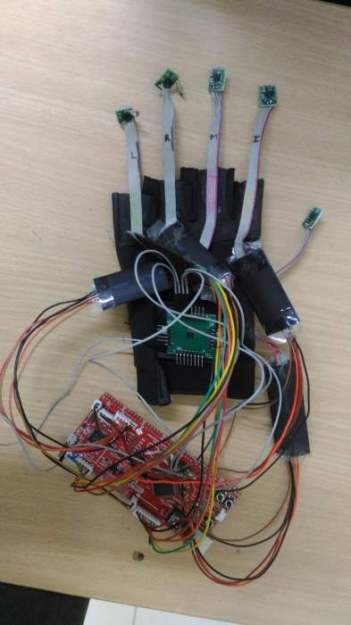 A data glove, which measures the individual joint angles of all the five fingers to understand the activity daily living, developed by Nayan Bhatt, Research Scholar from the Department of Applied Mechanics, IIT Madras recently won the Budding Innovators Award given by the Delhi-based National Research Development Corporation (NRDC). He has been working on developing models for studying finger kinematics for the last three years.

The data glove has 15 sensors (plus an additional reference sensor) that help in gathering information about kinematic or hand motion. The sensors are placed on the segments of a finger; each finger has three segments and the junction between two segments forms a joint. Each sensor is connected to a microcontroller board using a flexible wire to collect data.

“The sensors measure the joint angles through the change in orientation information. We are interested in gathering information about motion of the fingers excluding the wrist,” says Mr. Bhatt. “In the case of people with Parkinson’s disease, the data glove will provide information about hand kinematics and help clinicians assess the severity of disease. It will compliment the traditionally used Universal Parkinson’s Disease Rating Scale.” It may find application in animation and other industries.

Efforts are now on to reduce the number of sensors used. “We will first use all the 15 sensors to perform some training postures which will then be used for developing an algorithm that will reduce the number of sensors used. With the machine learning algorithm developed by Bhatt we can use as few as eight sensors. We want to reduce it to six,” says Dr. Varadhan S.K.M. from the Biomedical Engineering Division of the Department of Applied Mechanics, IIT Madras.

A finger can move in different directions. So the total number of joint angles is about 21. Sensors have been used to sense all the 21 angles. “Ten predicted angles have large errors of more than 2 degree and the remaining angles have less than 2 degree error. The average is 5 degrees. In a few months with advance algorithms we might be able to reduce the average prediction error to 2-3 degrees,” says Dr. Varadhan.