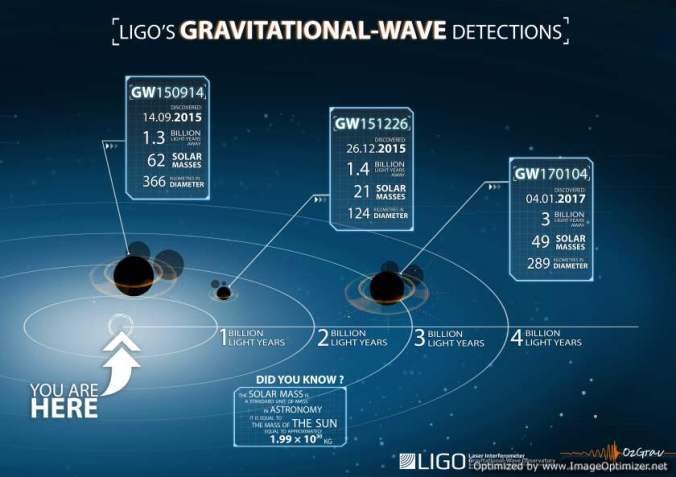 An international team of researchers has made a third detection of gravitational waves, ripples in space and time, in a discovery that provides new insights into the mysterious nature of black holes and, potentially, dark matter. – Image: LSC/OzGrav

The U.S.-based Laser Interferometer Gravitational-Wave Observatory has discovered a new population of black holes with masses that are larger than what had been seen before with X-ray studies alone (purple). The three confirmed detections by LIGO (GW150914, GW151226, GW170104), and one lower-confidence detection (LVT151012), point to a population of stellar-mass binary black holes that, once merged, are larger than 20 solar masses — larger than what was known before. Image: LIGO/Caltech/Sonoma State (Aurore Simonnet)

Hints on how the binary black holes formed

The difference in the direction in which at least one of the black holes is spinning on its axis as it orbits around the other black hole provides some clue on how these binary black holes might have formed.

“Two stars formed from a cloud of gas would rotate in the same direction. When the stars explode and black holes are born and form a binary the axes of rotation will remain the same,” says Dr. Bhalerao. Since at least one of the black holes might be rotating in a direction misaligned with the overall orbital motion, the black holes could have formed separately and come together later in life within crowded stellar clusters. The black holes pair up after they sink to the centre of a star cluster.

“Since the history of formation of the two black holes is different, the black holes can be spinning in any direction relative to their orbital motion,” says Dr. Bhalerao. As the latest evidence from black holes show evidence of black holes being non-aligned, the data supports the dense stellar cluster theory.

“With the third definite detection of gravitational waves from a coalescing black hole binary, we have discovered a new class of astrophysical sources to test Einstein’s theory of general relativity in extreme conditions,” Dr. Bala Iyer, the Principal Investigator of the Indian team in LIGO says in a LIGO release. Dr. Iyer is a Simons visiting professor at the International Centre for Theoretical Sciences (ICTS), Bengaluru. “The ICTS group played a key role in developing and implementing an analysis that was used to test the consistency of the observed signals with general relativity,” the release says.

The nine-member ICTS team in LIGO also contributed to the estimation of the mass and spin of the remnant black hole produced by the merger. By studying the properties of black holes, future observations will tell us how exactly these binary systems are formed in nature.