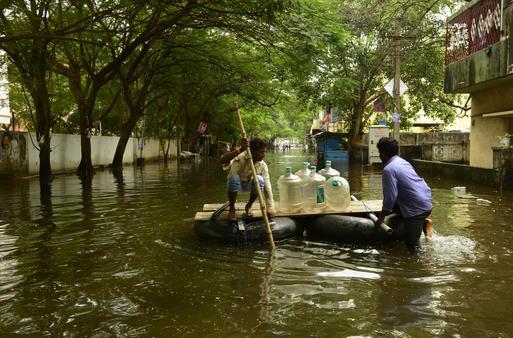 Both extreme El Nino conditions and the warming trend in the Bay of Bengal contributed equally to the Chennai deluge.

The extreme El Nino conditions in 2015 and the warming trend in the Bay of Bengal contributed equally to the unprecedented heavy rainfall witnessed in Chennai for three days from November 30 to December 2, 2015, a team of researchers has found. On December 1, the Chennai observatory recorded nearly 276 mm of rainfall; the normal rainfall for the entire month is 191 mm.

El Nino generally causes less than normal rainfall in the case of southwest monsoon. In contrast, it brings about above-normal rainfall during northeast monsoon. This is because of the difference in seasonal wind patterns between the two monsoons.

The study by the University of Hyderabad and the Indian Institute of Technology (IIT) Bombay researchers suggests that the extreme El Nino that occurred in 2015 played an important role in Chennai’s heavy rainfall. After 1982 and 1997, the 2015 event also turned out to be an extreme El Nino event.

“Another factor that seems to have played an important role is the consistently warming of Bay of Bengal off the coast of Tamil Nadu and Andhra Pradesh,” says Dr. Karumuri Ashok from the Centre for Earth and Space Sciences, University of Hyderabad and the corresponding author of the paper published in the journal Climate Dynamics.

The magnitude of correlations

A simple linear correlation analysis carried out by the authors indicates that the Bay of Bengal sea surface temperature is indeed positively and significantly correlated with northeast monsoon rainfall and can cause surplus rainfall during the monsoon season. The magnitude of correlations of northeast monsoon with El Nino conditions and the Bay of Bengal warming are nearly similar.

“This motivated us to study if the recent warming the Bay of Bengal contributed to the intensity of the 2015 Chennai rainfall event,” says Dr. Ashok. “Since 2015 was an extreme El Nino year, we wanted to know if the El Nino also had a significant effect.”

The researchers first established that the numerical model they used has the ability to capture the evolution of the event in the region off Tamil Nadu, and Chennai in particular. Though the area averaged value rainfall derived from satellite data for December 1, 2015 was 90 mm, the model using the Optimum Interpolation Sea Surface Temperature V2 (OISSTV2) dataset could stimulate about 70 mm. Though the model did not stimulate the exact amount of rainfall on December 1, it was close to 80% of the actual value. “Our interest was not to predict the exact hourly evolution quantitatively but to verify whether the model is able to capture the evolution qualitatively,” he clarifies.

“Based on sensitivity experiments carried out using the Weather Research and Forecasting (WRF) model we could conjuncture that about 21% of the intensity of the extreme Chennai rainfall can be attributed to the extreme El Nino conditions,” Dr. Ashok says. “Interestingly, the warming trend in the Bay of Bengal [sea surface temperature] contributed equally to the Chennai event.”

He however cautions that these results have been arrived using just one dynamical model. “We need to confirm if this result is correct. So we need to repeat using more cases with the same model and similar type of  studies using other numerical models, including coupled models,” he says.

It remains to be seen if this kind of contribution from the tropical Pacific to the extreme rainfall during the northeast monsoon happens only during extreme El Nino or whether normal El Ninos too can cause it. “This is important because the El Nino itself is changing,” he says.