Scientists at the Kolkata-based Indian Statistical Institute have discovered fossil remains of horned reptiles about 245 million years old (early Middle Triassic) from the Satpura Gondwana basin in Madhya Pradesh. The reptile is a new genus and has been named Shringasaurus indicus. The results were published in the journal Scientific Reports.

Shringasaurus belongs to a group of reptiles (Allokotosauria) that appeared in the Early or Middle Triassic and became completely extinct close to the end of the Triassic period (approximately 200 million years ago).

The name Shringasaurus indicus is derived from ancient Sanskrit and Greek roots and refers to the horns present on its skull (‘Shringa’ for horn and ‘sauros’ for reptile), while indicus refers to India, the country of discovery.

Unlike other Triassic reptiles (archosauromorphs — crocodiles, dinosaurs and their descendants, the birds, and their ancestors) that are about 2.5 metres long, the S. indicus is 3-4 metres in length, 1.25−1.50 metres tall at the hip, and has a relatively long neck and small head. The ribs are also bigger than other reptiles of that time. It has leaf-shaped teeth with small cusps, suggesting that the reptile was herbivorous. The researchers reconstructed the reptile from the recovered bones, based on which they were able to assess the reptile’s length and height.

Most strikingly, it has a pair of large horns. The discovery of horns overthrows the earlier notion that horned species were restricted to dinosaurs of the Cretaceous period (140 million years ago).

A pair of horns

“In the geological deep time, horns were exclusive to the dinosaurs in the Cretaceous period. But based on our discovery, we can say that early reptiles developed horns more than 100 million years before their appearance in dinosaurs,” says Saradee Sengupta from the Geological Studies Unit at ISI Kolkata and the corresponding author of the paper. Indeed, the horns of S. indicus are similar, but independently acquired, to those of ceratopsian dinosaurs, such as Triceratops.

“The horns seen in S. indicus are very significant. Archosauromorphs were not known to have horns either during the Triassic or Jurassic period,” says Prof. Saswati Bandyopadhyay from the Geological Studies Unit at ISI Kolkata and one of the authors of the paper. 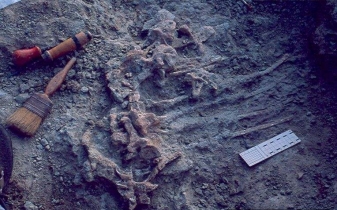 Though no fossils were recovered with intact pair of horns, the researchers were able to identify the left and right horns from their anatomical features. Also, the discovery of adult reptile bones without horns is indicative of females and therefore of sexual dimorphism. Juveniles too have horns, though smaller in size.

Different lines of evidence indicate that the horns of S. indicus originated through sexual selection. These horns would not have been effective against predators. It would have served more to attract females or to fight with other competing males to gain access to receptive females as occurs in multiple modern animals with behaviours driven by sexual selection.

The Permo-Triassic mass extinction about 252 million years ago wiped out nearly 95% of the marine species and equally affected the terrestrial landscape. After the extinction, the reptiles or archosauromorphs (crocodiles, dinosaurs and their descendants, the birds, and their ancestors) became progressively the dominant faunas on land.

During the early evolution of archosauromorphs, the members acquired a considerable morphological diversity — large quadraped predators, flying forms, and marine long-necked species. With a large-sized body exceeding the size range commonly seen in reptiles at that time and an unusual anatomy, the S. indicus was one such weirdo. But it fits in neatly with the evolutionary mechanism involved in the diversification of animals after the great extinction.