A team led by researchers from JNU and ICGEB, New Delhi has identified a molecule that  prevents malaria parasites from invading red blood cells (RBCs) and causing the disease. It prevents the interaction between parasites and receptors found on RBCs thereby preventing the parasites from invading the RBCs. Since the molecule targets the receptors found on RBCs, it can be used even against drug-resistant malaria parasites.

Researchers from New Delhi have for the first time deciphered a multiprotein complex that is involved in the invasion of the red blood cells (RBCs) by Plasmodium falciparum malaria parasites. They have also identified a peptide molecule from the codon-shuffled library that can effectively prevent the interaction between malaria parasites and receptors found on RBCs thereby preventing the parasites from invading the RBCs and causing the disease.

During infection with Plasmodium species, the merozoite form of the parasite invades RBCs and replicates inside them. It is during the blood-stage of infection that malaria disease occurs.

P. falciparum parasites are known to quickly develop resistance against drugs. This is because the parasites undergo mutations thereby making the drugs that target the parasites ineffective. A team led by Dr. Anand Ranganathan from the Special Centre for Molecular Medicine at Jawaharlal Nehru University (JNU), New Delhi and Dr. Pawan Malhotra from the International Centre for Genetic Engineering and Biotechnology (ICGEB), New Delhi has used a different approach to overcome the problem of drug resistance.

In experiments carried out in test tubes, there was about 80% reduction in parasite invasion of RBCs. 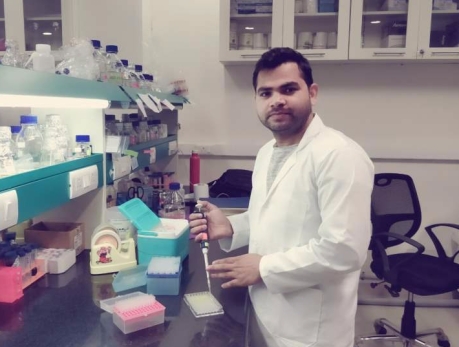 “Unlike the malaria parasites, the red blood cell receptors will not undergo mutation. That is why we were able to target the receptors and prevent the invasion of RBCs by even the drug-resistant malaria parasites. That’s the advantage of targeting the host protein [receptor] that is essential for the pathogens to infect the cells,” says Dr. Ranganathan.

An immunosuppressive drug (cyclosporine A) that binds to cyclophilin B receptors on RBCs is effective in killing malaria parasites. Studies on mice model by the researchers showed that cyclosporine A drug reduced invasion by malaria parasites by about 80% when RBCs were treated with 100 microMolar of the drug; the reduction in invasion of RBCs by the parasites was about 80% when 50 microMolar of the drug was directly added into the culture.

“But in mice model it has been shown that the drug has adverse effects as it also kills RBCs. Using the drug in two different experiments we confirmed that cyclophilin B receptors were involved in the invasion process,” says Dr. Prem Prakash from ICGEB and the first author of the paper published in Nature Communications.

“We found multiple sets of interactions between parasites and human RBCs,” says Dr. Mohammad Zeeshan from ICGEB and the other first author of the paper. There are two main receptors on RBCs and two proteins of the parasite which form a four-protein complex.

“By interrupting the binding of the parasite protein with RBCs at one of the receptors the whole protein complex falls apart. It is like a number-lock with a four-digit combination. Interrupting any one of the steps will prevent the parasite invasion of RBCs,” says Dr. Ranganathan. “We are looking at peptides that can bind to each of the four targets. The long term goal is to add the four peptides together to achieve total inhibition of parasite invasion.”

At 25 microMolar, the dosage used in the experiments is very high. Having deciphered the mechanism of parasite entry, the team is now working to reduce the dosage to use the peptide as a drug. “We can either modify the cyclosporine A drug to make it less toxic and use it for preventing malaria or use the peptide molecule as an inhibitor. It is easier to take the drug than the peptide to clinical testing by making necessary modifications,” says Dr. Malhotra.