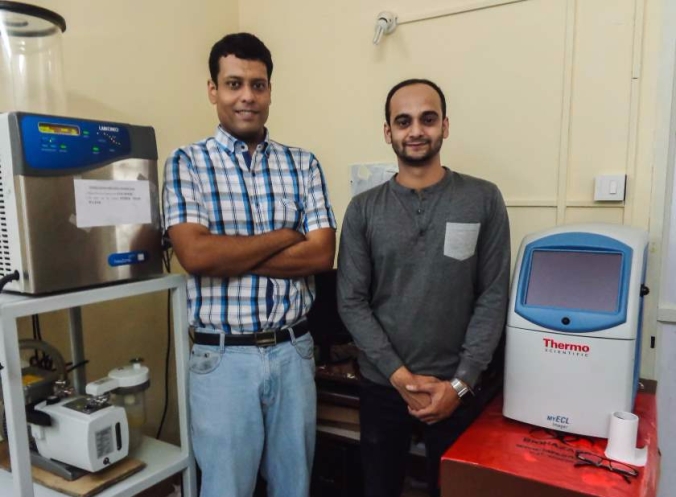 Unlike the rod-shaped E. coli, the spherical shape of S. aureus results in fewer contact points with the surface and less likelihood of getting killed, say Jafar Hasan (right) and Kaushik Chatterjee.

Researchers at IISc have produced etched aluminium that is capable of killing Gram-negative bacteria such as E. coli and keep surfaces free of both E. coli and S. aureus. Surfaces that have both micro and nanoscale features are most effective in killing bacteria, drug-resistant bacteria included. These can find ready application in hospitals to prevent hospital-acquired infections.

Now, hospital-acquired infections can be reduced by using etched aluminium surfaces in ICUs, operation theatres and other places as well as by using them on regularly used objects such as taps, bedside tables, hand rails to name a few where transmission of bacterial infections is high.

Like shark skin and wings of cicada and dragonfly that are free of any pathogens, a team of researchers led by Prof. Kaushik Chatterjee from the Indian Institute of Science (IISc), Bengaluru used etched aluminium to kill both drug-sensitive and drug-resistant bacteria and also prevent bacteria from attaching and growing on the surfaces. The aluminium surfaces have very minute textures produced through chemical etching which kills the bacteria and is responsible for antifouling.

Though the precise mechanism by which the bacteria gets killed is not known, like the wings of cicada and dragonfly, the nanoscale features appear to mechanically rupture the bacterial cell membrane due to physical interaction of the cells with the surface topography. The microstructures limit the ability of the bacteria to adhere to the surface. 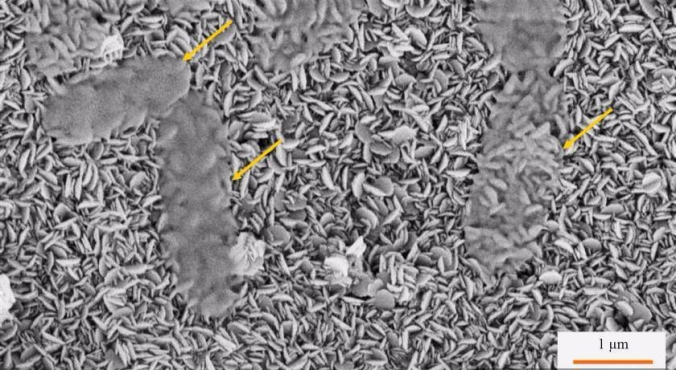 “Unlike the rod-shaped E. coli, the spherical shape of S. aureus results in fewer contact points with the surface and less likelihood of getting killed,” says Jafar Hasan from the Department of Materials Engineering at IISc and first author of the paper published in the journal Materials & Design.

Using sodium hydroxide and potassium hydroxide of different concentrations to etch the aluminium alloy for different time periods (10 to 60 minutes), the researchers were able to keep the surfaces nearly free of Gram-negative bacteria. “Etching aluminium surface is not only a simple, single-step process but can also be scaled-up easily,” says Dr. Hasan. Dr. Hasan is an Early Fellow of the Wellcome Trust DBT India Alliance.

“We are engaging with people who are responsible for infection-control in hospitals to know the specific locations where the material can be used. They might either want aluminium foil with these surface properties can be regularly replaced or permanent fixtures,” says Prof. Chatterjee. “We have not studied the long-term durability of the surface features and their effectiveness. The durability will depend on how often such surfaces are handled by people.”

“A combination of five surface roughness parameters resulted in maximum (over 80%) bactericidal efficiency,” says Dr. Hasan. “The study proposes topography-based design rules of surfaces that can kill bacteria. The design can be efficiently transferred to other materials for bacteria killing property.”

The experiments with drug-resistant bacteria at the hospital were carried in collaboration with Dr. Vasan Sambandamurthy and his team from Mazumdar Shaw Centre for Translational Research, Narayana Hospital, Bengaluru.