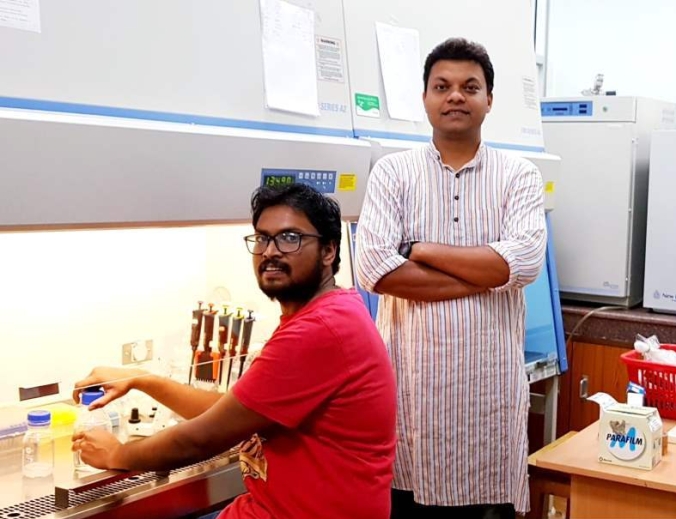 Trials on rabbits have been promising. The scaffold will next be tested on larger animals, say Biman Mandal (right) and Joseph Christakiran Moses.

IIT Guwahati researchers have developed a scaffold made of silk composite functionalised with copper-doped bioactive glass. The scaffold facilitates faster and better bone regeneration, facilitates growth of blood vessels and successfully integrate the newly formed bone cells with the native bone. Trials on rabbits have been promising.

A scaffold made of silk composite functionalised with copper-doped bioactive glass to facilitate faster bone regeneration has been developed by researchers at Indian Institute of Technology (IIT) Guwahati. The scaffold seeded with stem cells was found to differentiate into bone cells, facilitate growth of blood vessels and successfully integrate the newly formed bone cells with the native bone.

The researchers were able to replicate the results in rabbits using functionalised non-mulberry silk composite. Rabbits with scaffolds implanted at the site of bone injury showed successful growth of bone cells and integration with the native bone at the end of three months.

Commercially available synthetic grafts have a failure rate of about 25% and 30-60% complication rates. This is due to slower bonding with native bone and poor blood vessel growth.

The team led by Prof. Biman Mandal from the Department of Bioscience and Bioengineering at IIT Guwahati developed the silk composite by adding chopped silk fibres to liquid silk. Unlike pure silk, the silk composite has greater strength. The addition of bioglass further enhanced the strength of the composite.

Besides enhancing the strength of the composite, the minerals from the bioglass gets deposited on the composite making it rougher. “Bone cells prefer rough surfaces and the scaffold mimics the native bone surface architecture,” says Prof. Mandal. Bioglass also helps in stem differentiation. “We found stem cells differentiating into bone cells with the formation of extracellular matrix similar to natural bone,” he says.

The researchers tested the potential of the composites in repairing bone defects in rabbits and found more than 80% bone formation at the end of 30 days. “In the rabbits, the scaffolds promoted new bone tissue formation and growth of blood vessels. The resorbable nature of the scaffolds enabled them to degrade inside the body while being replaced with viable bone tissue in the small focal sized bone defects. No remnants of the scaffold were seen,” says Joseph Christakiran Moses from the institute’s Department of Bioscience and Bioengineering and first author of a paper published in the journal Advanced Healthcare Materials.

“The results from rabbit model are very promising. We would like to undertake trials on larger animals such as sheep and goats,” says Prof. Mandal. “Since we use green methodology, the prospects of regulatory clearance are brighter.”