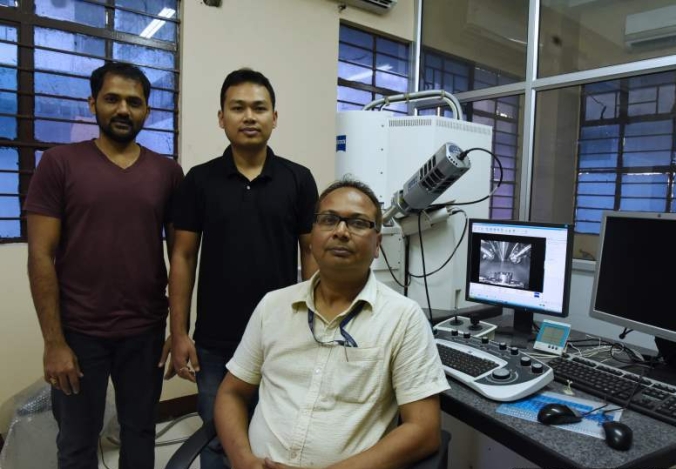 IASST, Guwahati researchers have fabricated a smart bandage that can be loaded with antimicrobials and used for healing wounds. The one with curcumin and graphene oxide showed faster and satisfactory healing along with hair growth in the wounded area in rat models by the end of three weeks.

A smart bandage material that can heal wounds better and faster and has antimicrobial properties has been fabricated by a team of researchers from the Institute of Advanced Study in Science and Technology (IASST), Guwahati. The bandage is made of cotton patch coated with chitosan-based hydogel that is loaded with curcumin and graphene oxide. The researchers used curcumin as a model drug and the same can be replaced with other antimicrobials.

“Cotton tends to stick to wounds and being fibrous it is difficult to remove it. By coating the cotton with chitosan and compressing the bandage we get a material with similar properties (porosity and ability to absorb water) as cotton but one that does not stick to the wound,” says Dr. Devasish Chowdhury from the Physical Sciences Division at IASST and corresponding author of a paper published in the journal ACS Sustainable Chemistry & Engineering.

More importantly, the absorption capacity of the cotton patch can be utilised for loading nanomaterials and antimicrobials to impart wound-healing properties. The researchers used graphene oxide nanomaterial since its antimicrobial properties and biocompatibility are already well documented. The nanosize of graphene oxide allows large amount of drug to be loaded onto the patch. Graphene oxide also increases the strength of the patch especially when it gets wet.

“We used curcumin as a model drug. Different drugs can be loaded on the patch depending on the nature of the wound,” says Achyut Konwar from the Physical Sciences Division at IASST and first author of the paper.

The wound healing property was also tested on rat models for a period of 21 days. The wounds were infected with S. aureus one day after wounds were created and treated with one of the four cotton patches three days after infection. Cotton patch with graphene oxide or curcumin showed almost similar wound-healing capacity at the end of 21 days. But wounds treated with the patch containing both graphene oxide and curcumin showed faster and satisfactory healing along with hair growth in the wounded area by the end of three weeks.

“The cotton patch containing graphene oxide and curcumin served as a smart dressing material for wounds infected with bacteria,” says Konwar. “The high absorption capacity of the patch takes care of the pus and porous nature provides good oxygen supply for faster healing. The absorption capacity was tested using blood plasma and was found to be good.”

“Currently, there is no control over drug release. We are trying to address this by using different nanomaterials. We should first functionalise the nanomaterial so that when the drug is loaded it attaches to the nanomaterial and gets released in a sustained manner,” Dr. Chowdhury says. “We must make sure that like graphene oxide, the chosen nanomaterial is biocompatible and does not get released into the wound.”