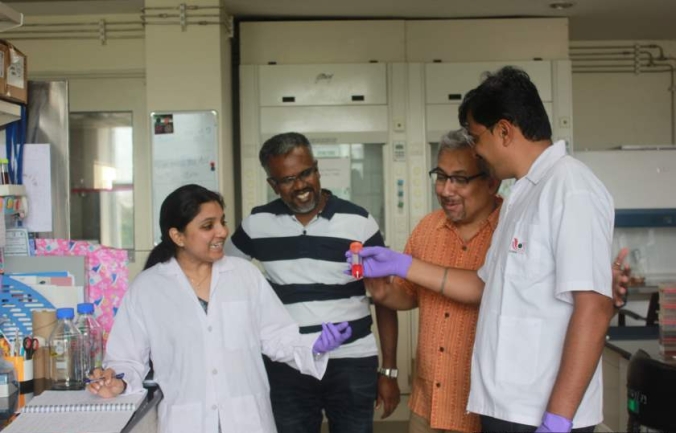 IISER Pune researchers have increased the uptake of poorly water-soluble anticancer drug by loading it in nanovesicles that self-assemble. The nanovesicles can be loaded with both hydrophilic and hydrophobic drugs. The encapsulated drug produced 94% silencing of the target AURKA leading to 25% inhibition of RalA. As a result, there was 38% inhibition of anchorage independent growth of cancer cells — metastasis.

By encapsulating the poorly water-soluble anticancer drug Alisertib in polysaccharide nano-sized balls or vesicles, researchers at the Indian Institute of Science Education and Research (IISER) Pune have been able to increase its uptake by breast cancer cells and achieve greater ability to restrict cancer cell growth. Better uptake of the drug when encapsulated meant lower concentration (0.02 microM) of the drug was sufficient to restrict cancer growth significantly better than the free drug.

The study, which was started about six years ago, gains importance as the drug by targeting AURKA now selectively inhibits RalA protein thereby disrupting cancer cells’ ability to grow without anchorage (anchorage independent growth). Anchorage independence in tumors is what allows cells to spread and grow at new sites in the body — metastasis.

Since producing inhibitors against RalA protein is particularly challenging and the existing inhibitor is not specific (targets both RalA and RalB), the researchers chose to target Aurora Kinase A (AURKA) instead. Aberrant AURKA activity has been implicated in cancer formation, and its inhibition could potentiate the effect of chemotherapies. When AURKA is silenced, RalA protein, which is present downstream, gets automatically (and selectively) inhibited.

“While the free drug did not inhibit the colony forming ability of cancer cells, the number of colonies was significantly reduced in the presence of nanovesicles loaded with the drug,” says Prof. Nagaraj Balasubramanian from the Department of Biology who led the team along with Prof. Manickam Jayakannan from the Department of Chemistry, IISER Pune.

The encapsulated drug produced 94% silencing of the target AURKA leading to 25% inhibition of RalA; the drug did not affect RalB. As a result, there was 38% inhibition of anchorage independent growth of cancer cells.

In comparison, at 50%, the Ral inhibitor achieved greater inhibition of RalA than the encapsulated drug but the silencing was not specific — RalB was inhibited by 64%. The inhibition of anchorage independent growth was only 33%.

“So the Alisertib drug did better than the existing Ral inhibitor and led to better inhibition of anchorage independent growth. That’s the most striking observation of the study,” he says. The results were published in the journal Molecular Pharmaceutics.

Hydrophobic and hydrophilic anticancer drugs loaded in the envelop and core of the nanovesicle respectively performed better than free drugs and synergistically killed breast and colon cancer cells. The proof-of-concept study was published in 2012 in Biomacromolecules.

“We are aiming to start animal studies in mice to study how well the drug contained in nanovesicles is able to inhibit breast cancer tumours. We are also using this drug loaded in nanovesicle to inhibit and study the role of AURKA and RalA in normal and cancer cells. So it also becomes a tool to understand the role of these proteins in cells,” Prof. Balasubramanian says.

“To make the nanovesicles self-assemble, we undertook some modifications to the dextran polysaccharide using a molecule from cashew nut shell extract,” says Prof. Jayakannan. “Since both are from bio-based nanosystems, the nanovesicles are not toxic to cells, and possibly human, and are biodegradable.”

Prof. Jayakannan and his team started working on making the nanovesicles self-assemble way back in 2008 and in 2012 they succeeded once they knew the structure that is required to make the nanovesicle with modification.

“The nanovesicle is bilayered and is held together to form a stable vesicle through hydrophilic-hydrophobic interactions,” Prof. Jayakannan says. Since the nanovesicles are about 120 nanometre in size and far smaller than 200 nanometre, they are easily taken up by cancer tissue but not normal tissue. Also, nanovesicles with the drugs loaded become water dispersible thus increasing the uptake by cancer cells. “We are working to make the nanovesicles even more specific to cancer cells,” he says.

The drug-loaded nanovesicles are cleaved by esterase enzyme once inside the cell. “In spite of being cleaved, the drug is released slowly in a controlled manner over 8-10 hours” Prof. Jayakannan says. This would be important for how nanovesicles act in tumours.