A research group at the Department of Chemistry, Bose Institute, Kolkata has 14 problematic papers with image manipulation and/or duplication listed on Pubpeer website. Two papers have been retracted and two more have been corrected for image manipulation. The two senior researchers of the group admit that there has been “inadvertent misrepresentation of images”.

Manipulation and/or duplication of images seems to be a problem for a research group of Dr. Manikuntala Kundu and Dr. Joyoti Basu at the Department of Chemistry, Bose Institute, Kolkata. So far, two papers have been retracted and two more have been corrected for image manipulation. There are 14 more papers listed on Pubpeer from the same group that seem to have similar problems with images.

The two senior researchers — Dr. Kundu and Dr. Basu — are common to all the 14 papers, including the papers that have been retracted and corrected. One of the two or both of them are corresponding authors in all the papers published between 2002 and 2015.

“Some of the panels in the published versions of Figs. 5 and 6 have not been faithfully represented. Due to inadequate archiving dating back almost 10 years, the authors are unable to provide the original unedited scans…,” reads the retraction note in The Journal of Immunology.

In the case of the 2006 Microbiology paper, the retraction note of 2015 reads: “The authors would like to retract the article as the published versions of Figs. 3b, 6a, b, d, 7a, b (lower panel) were modified prior to publication…”

The Microbiology paper has been retracted for image manipulation as mentioned on Pubpeer (see the slide show below for the concerns raised on Pubpeer).

The two papers that have been corrected for images were published in the journal Nature Immunology and Journal of Biological Chemistry.

The May 2007 paper in the journal Nature Immunology has been corrected in November 2014. The corrections reads: “In the version of this article initially published, lanes 1, 2 and 4 of Figure 5b included duplicates. The correct immunoblot is now presented.” The image below shows the correction carried in Nature Immunology (left) are for concerns initially raised on Pubpeer (right).

The correction carried in the paper.

A correction in the April 2010 paper in the Journal of Biological Chemistry reads: “Fig. 2C was prepared from different sections of the same gel and autoradiogram, but the border between the different sections was not clearly indicated. The revised Fig. 2C now includes a line defining this border. This error does not change the interpretation of the results or the conclusions of this work.” The image below shows the correction carried in The Journal of Biological Chemistry (left) are for the same concerns that were raised on Pubpeer (right). 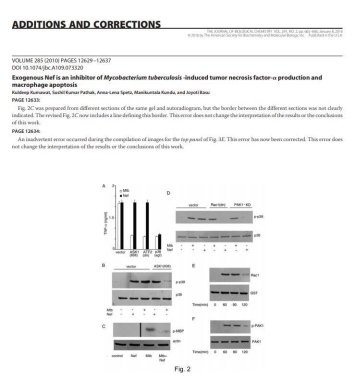 Correction in The Journal of Biological Chemistry 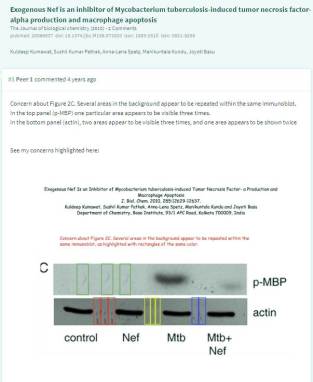 Concerns that were raised on Pubpeer about the same paper.

A correction in another figure the same Journal of Biological Chemistry paper reads: “An inadvertent error occurred during the compilation of images for the top panel of Fig. 3E. This error has now been corrected. This error does not change the interpretation of the results or the conclusions of this work.”

I did feel the concerns raised in other papers were valid. Since I have no expertise in Chemistry I got in touch with two senior researchers from reputable institutions in India to scrutinise the images. While one researcher did not agree that images in one paper were duplicated, both the researchers agreed that images in other papers were indeed duplicated. Having gained the confidence that the concerns raised on Pubpeer were real, I did get in touch with Dr. Kundu and Dr. Basu.

In response to my query, they emailed saying: “First of all, we accept that there has been inadvertent misrepresentation of images in some of our published papers due to errors in assembly of figure panels (which are reshuffled several times during submission, revision or resubmission).”

On who should be held responsible, especially since the papers in question were published between 2002 and 2015 and not one author other than themselves are common to all papers, they say: “In multi-author papers, it is difficult to pinpoint who is responsible for the errors.”

To my question whether they agreed with the concerns raised on Pubpeer, and if they intend getting the papers with duplicated images corrected or for want of the original images, get them retracted, they say: “When the errors were pointed out, almost a decade had passed by since publication.  In the meantime, CDs on which data had been stored were damaged, and the computer attached to the imaging station (scanner), had also crashed. Where original data could be retrieved, we have corrected the papers, and some more will be corrected.”

On whether the duplicated images were honest mistakes or deliberate attempts to mislead the readers, they note: “We stand by the data reported in these papers. Experiments based on the findings reported in these papers were performed in later years in our laboratory and published subsequently. Other independent labs have, in several instances, reported similar findings.”

Asked if they suspected any junior author in duplicating the images and if it wasn’t their responsibility to check for correctness of all data as corresponding authors, they note: “There was a transition from films and photographs to digital recording of images close to two decades ago. In the digital age, figure panels are often created from raw images after significant reshuffling and reassembly.

Steps to be taken to minimise mistakes

“It is necessary to train both students and senior researchers on how to archive data, how to create images without misrepresentation and on the dangers and pitfalls of careless practices. Such steps were not taken when we entered the digital age.

“No mechanisms have been put in place even now, to train students and researchers in the majority of institutions in India, to avoid what could potentially be labelled as improper manipulation of images. It is imperative that we react to this need.

“We would also like to suggest that mechanisms be put in place at every department and institutional level, so that a centralised cell supervises archiving of data. Cloud storage at institutional level is essential to prevent loss of data. The matching of raw data with final images being sent for publication also needs third party supervision (which is in place in several western institutions) so that errors are minimised. For example, we, in our laboratory, have designated a staff [member] (who is not a researcher) for this purpose. Software needs to be installed to correct what the human eye may miss.

“Misrepresentation of images is not the only problem in the way science is conducted in India. Lab records are often poorly maintained in many institutions across the country. Strict policies need to be in place on monitoring lab records and archiving data. Till such a time comes, individual scientists will continue to be crucified in spite of their sincere efforts to conduct research honestly.”

And about Pubpeer they say: “Several retractions and corrections from Indian laboratories do not feature on Pubpeer. Therefore, Pubpeer may not be the ideal source for statistical analyses of retractions, corrections or image manipulation[s].”

I fully agree with them that one cannot use Pubpeer to assume that scientists who do not feature here have never ever indulged in scientific misconduct, especially image manipulation, either knowingly or unknowingly. Having said that, Pubpeer has reported groups from AIIMS and BHU that have a bunch of papers (but far fewer than the Bose Institute group) where duplicated images have been spotted. And there is a senior researcher at a CSIR lab in Delhi whose papers have been found to have duplicated images. Since his name is mentioned in different ways in the problematic papers, it takes a while to get a final count.

Image duplication in papers is a huge problem in India

Countries plotted above the blue line had a higher-than-expected proportion of problematic papers.

A 2006 paper studied 40 journals for image duplication and scrutinised the country of origin of authors in 348 problematic papers published in PLOS ONE alone. And this is what they found: While majority of PLOS ONE papers containing inappropriately duplicated images were from China and the U.S., the proportion of papers containing problematic images were higher from China and India. India was found to have 1.93 higher-than-predicted ratio of papers containing image duplication, which is higher than 1.89 in the case of China.

The 2006 studied revealed another disturbing fact — the authors of papers with problematic images were repeat offenders. In nearly 40% of the papers with duplicated images, papers by the same authors published in other journals showed revealed similar problems with images.

1) MtrA, an essential response regulator of the MtrAB two-component system, regulates the transcription of resuscitation-promoting factor B of Mycobacterium tuberculosis

7) Fas-, caspase 8-, and caspase 3-dependent signaling regulates the activity of the aminophospholipid translocase and phosphatidylserine externalization in human erythrocytes

8) Interaction between FtsW and penicillin-binding protein 3 (PBP3) directs PBP3 to mid-cell, controls cell septation and mediates the formation of a trimeric complex involving FtsZ, FtsW and PBP3 in mycobacteria

One thought on “Two scientists at Bose Institute have 14 papers with manipulated, duplicated images”