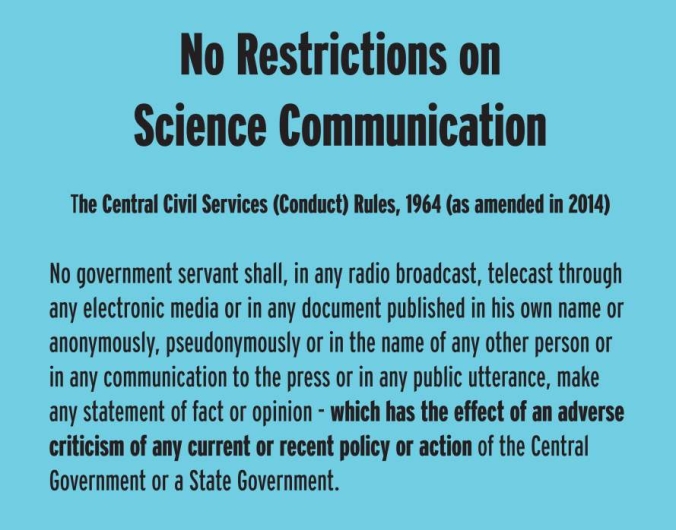 Even as DST is taking steps to promote science communication, researchers at certain government labs and academic institutions are prevented from communicating even their published work with the media without the prior permission from the director. Since the government service conduct rules do not bar researchers from discussing their work, restrictions placed by some directors are nothing but a reflection of their feudal mindset.

Just today, when my colleague at The Hindu contacted a scientist at the Ahmedabad-based Physical Research Laboratory to discuss the work published in a peer-reviewed journal, the reporter was told: “You are free to report on the published paper. But if you want to quote me then send me a list of questions and I will respond and get it vetted by the Director and then send it to you.”

This is not the first time that science journalists in India have been told that permission from the director of the institute, lab or centre is needed before speaking to the media even if the discussion is all about the work described in a published paper.  And this will not be the last time either if corrective steps are not taken immediately. I had touched upon this issue in an article written in January 2017.

There are a few CSIR and ICMR labs where scientists are barred from speaking to the media about their published work without first seeking the director’s permission. Strangely, a couple of IITs and IISERs too have this weird rule in place. That only certain CSIR, ICMR labs and a couple of IITs and IISERs have this rule confirms that it is not a policy decision taken at the headquarters, the Science Ministry or UGC.

For instance, there used to be a free flow of information and discussion between the media and the scientists at Chennai’s National Institute for Research in Tuberculosis (formerly known as Tuberculosis Research Centre). This included both published work and important developments that would positively or negatively impact TB diagnosis and treatment. This free exchange of information peaked when Dr. Soumya Swaminathan was the Director of NIRT before becoming the Director-General of ICMR. But the person who assumed the role of Director-incharge of NIRT after Dr. Swaminathan’s departure changed this altogether.

Strangely, there is no rule that debars researchers from communicating their work with the media. The Central Civil Services (Conduct) Rules, 1964 (as amended in 2014) only talks of adverse criticism of government policy or action: “No government servant shall, in any radio broadcast, telecast through any electronic media or in any document published in his own name or anonymously, pseudonymously or in the name of any other person or in any communication to the press or in any public utterance, make any statement of fact or opinion – which has the effect of an adverse criticism of any current or recent policy or action of the Central Government or a State Government.”

“The way government organisations are structured is that the rules of employment requires them to seek permission before they communicate. To apply that rule to communicate about science is not all necessary. If it is applied, it is applied at the level of individual institutions or headquarters. And that needs to be taken up. It is completely unnecessary,” Prof. K VijayRaghavan, Principal Scientific Adviser to the Government of India told the gathering at the recently concluded workshop on “Science, Journalism, Media: Communicating Science in a Changing India” held at The Institute of Mathematical Sciences, Chennai.

In an interview to me in January 2017, Noble Laureate Prof. Venkatraman Ramakrishnan, President of the Royal Society too said scientists should be free to discuss about their work with the media. “Scientists should be free to talk to the media or public about their work. In the U.K., if you are representing your organisation’s views, and it goes for me as well if I am representing the Royal Society’s views, it has to be cleared. But I can certainly talk as an individual about my work, especially published work. There is no reason why someone should give permission for scientists to talk about their work, unless there is some issue like if the information is classified or has security implications… But if the work is already published then there is no reason why they should not talk freely. In the case of published work, I would have no problem discussing with the press.”

It is shocking that researchers in certain government labs and academic institutions are restricted from freely communicating their work with the media while the DST is actively trying to promote science communication even by young researchers. DST’s Augmenting Writing Skills for Articulating Research (AWSAR) initiative‘s main intent is to promote science communication even at the level of PhD students and Post-docs. Students are required to communicate their research as popular science articles and get them published in newspapers, magazines and blogs. There are attractive prizes to be won too.

I wonder what kind of hurdles and challenges PhD students and Post-docs at these institutions and labs would face if they wish to write about their work in a newspaper so as to participate in the AWSAR programme.

While nothing stops journalists from writing on published papers even without getting in touch with the researchers concerned, the very purpose of science communication gets defeated if such articles are factually wrong, hyped or misleading. It is to avoid these that journalists reach out to researchers prior to writing the articles.