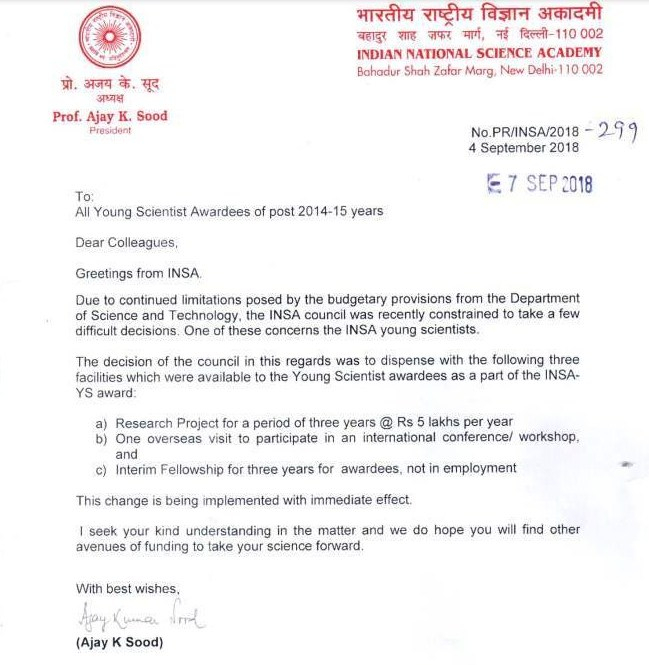 Due to limitations in budgetary provisions from DST, the Indian National Science Academy council has decided to “dispense with” research grant, fellowship and fully-paid visit abroad to attend a conference to all Young Scientist Medal winners post 2014-2015. Ashutosh Sharma, Secretary, DST says budget of INSA has not reduced but has instead been going up.

Citing “continued limitations posed by the budgetary provisions from the Department of Science and Technology” the New Delhi-based Indian National Science Academy (INSA) council has decided to “dispense with” three facilities given to researchers who had won the Young Scientist Medal given by the Academy.

In a September 4, 2018 letter addressed to all awardees post 2014-2015, Ajay Sood, President of INSA had stated that the INSA council had decided to dispense with the research grant of Rs.5 lakhs per annum for three years for a research project. The awardees will no longer be eligible to participate in an international conference/workshop, and those who are not employed will not get interim fellowship for three years, the letter says.

These changes are being implemented with “immediate effect”, the letter adds.

An April 2017 letter informing a scientist that he has been awarded the Medal says: “The awardee within five years of receipt of the Award will be considered for a visit abroad with full support for presenting research work at conferences, and/or participating in collaborative/training research projects, wherever possible.” This is the reason why the letter mentions all awardees post 2014-2015.

In addition to interim fellowship (amount depending on qualification and research experience) given to awardees who are unemployed but attached to a research/academic institution, contingency Rs.25,000 per year will be provided, says the April 2017 letter sent to the awardee.

“The cash prize of Rs.50,000 given to each Young Scientist has not been stopped,” says Prof. Subhash C. Lakhotia from Banaras Hindu University, Varanasi and former Vice President (publications), INSA. And that is because since 1981, the award has been “solely managed and funded by INSA”.

Prof. Sood refused to comment on the issue saying: “The letter is self-explanatory. Based on the budget, the council had to take the decision. I have nothing more to add.”

“The budget of INSA has not reduced. Instead, it has been going up,” Prof. Ashutosh Sharma, Secretary, DST tells me. “INSA is an autonomous body. What activity they want to fund is their decision. DST doesn’t tell what they should do.”

Plight of a Medal winner

“I didn’t urgently need the grant as I already have a project which comes to an end this year. So I thought I will apply for the INSA Young Scientist research grant by the end of this year and go for a conference next year,” says a 2017 Young Scientist Medal winner ruefully.

“For a younger researcher who is just about setting up his/her lab, this grant of Rs.5 lakhs per annum for three years comes very handy. It may not be sufficient to buy a major equipment, but it can surely be of help to buy a small equipment or could be used for buying consumables,” the award winner says.

The 2017 INSA Young Scientist Award winner adds: “The Rs.5 lakh grant would be particularly useful for those who are unemployed as they could use it to get attached to a lab and use the money to buy consumables.”

Who stands to win

Since 1974, the award is given annually to researchers in “recognition of notable contributions to any branch of science or technology”. The researchers, less than 35 years of age, should have carried out the work in India to be eligible for the award. The INSA website describes the Young Scientists Award as the “highest recognition of promise, creativity and excellence in a young scientist”. Till 2018, 819 young scientists have been given this award. In 2018, 30 researchers were given the award; 30 is the upper limit for the number of awards to be given in a year.