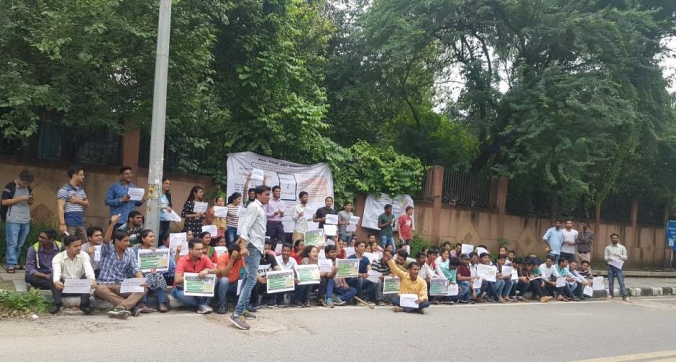 Over 100 research scholars held a hunger strike on September 10, 2018 in New Delhi to press their demands

After several months of delay, the Council of Scientific & Industrial Research (CSIR) has finally decided to issue certificates and release fellowship to students who have cleared the CSIR-UGC National Eligibility Test (NET) for Junior Research Fellowship (JRF) and for Lectureship (LS) qualifying exam held in June and December 2017.

After several months of delay, the Council of Scientific & Industrial Research (CSIR) has finally decided to issue certificates and release fellowship to students who have cleared the CSIR-UGC National Eligibility Test (NET) for Junior Research Fellowship (JRF) and for Lectureship (LS) qualifying exam held in June and December 2017.

A notice posted today on CSIR website says: “Subject to outcome of the Appeal (LPA-2243-2017), certificates are being issued shortly to the candidates declared qualified in the June and December, 2017 CSIR-UGC JRF/LS exams. Fellowships will also be released as per the laid down guidelines.”

“About 8,800 students had cleared the exam held in June and December last year but had not received the certificates and hence have not received any fellowship,” says Nikhil Gupta from CBMR SGPGI, Lucknow and one of the researcher scholars spearheading the agitation. This is due to delay following an appeal filed by CSIR in the High Court of Punjab and Haryana in the CSIR Vs Ramandeep Kaur case. In an order dated December 20, 2017 the court said: “There would be no impediment in the declaration of result of the tests held in June, 2017 but the same shall be subject to the outcome of the appeal.”

“A few days ago the CSIR HRD Group took a decision to release the certificates to all the students who have cleared the exam in June and December 2017. As the matter is pending in the High Court of Punjab and Haryana and has not attained finality, formal qualifying certificates were not issued,” Dr. Sanjay Kumar, Head of the Human Resources Development Group at CSIR, Delhi told me on September 9. “The next hearing is in December this year. In view of loss of considerable time, suffering of students in terms of not [being able to] register for PhD/Fellowship and the present stalemate is not in the interest of students, CSIR is in the process of considering issue of certificates to the qualified candidates.”

The certificate from CSIR is necessary for candidates to be admitted as a PhD student in any research institution or lab in India. Students who enrol for a PhD get fellowship of Rs.25,000 per month plus HRA once the institution sends all the documents to CSIR.

“The fellowship will be released immediately after issue of certificate and completion of requisite formalities by the students and the host institute,” Dr. Kumar said. Denying that many PhD students have not been getting their fellowship for nearly a year, he said: “We have released funds to students whenever we have received all the documents from the institution. From our side we are not interested in delaying fellowship to any student.”

On January 15, 2018 and again in July 2018, CSIR had said that issuance of a formal certificate to qualified candidates is “not legally tenable as the matter is still pending” in the Court. Instead, “marks statement of the qualified candidates may be treated as proof of their qualifying the said exam provisionally”.

While many students were able to use the marks statement as proof and join as PhD students, none of them had received the monthly scholarship and HRA.

“I joined CSIR-Central Institute of Medicinal and Aromatic Plants, Lucknow as a PhD student using the marks statement in February this year. My fellowship is yet to be activated and so I have not received any fellowship since February,” Divya Mishra, who is one of the core members leading the agitation told me in the first week of September.

In response to a letter sent by Ms. Mishra, on March 27 this year the Prime Minister’s Office noted the sub judice nature of the case but said: “Please note that CSIR is taking steps to settle the issue at the earliest.”