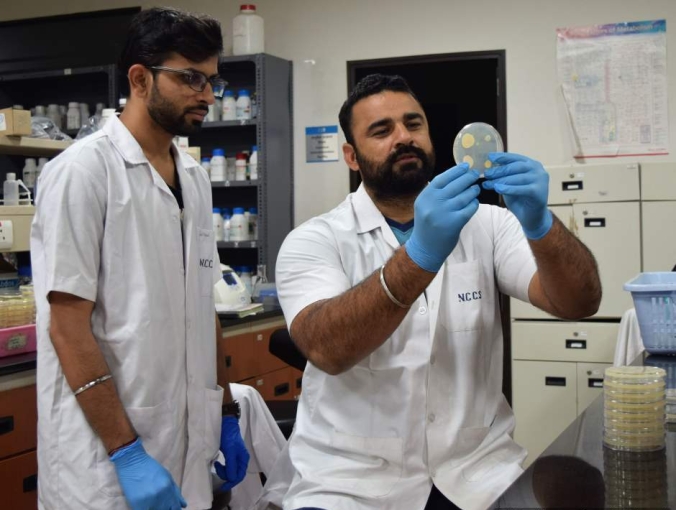 The skin and faecal microbiota increased by 2.3-fold and 2.9-fold respectively during the gathering, say Avinash Sharma (right) and Kunal Jani.

During Kumbh Mela in 2015, microbial diversity dropped by nearly 37.5% while bacterial load increased by about 130-fold at five bathing sites in Nashik from where samples were collected prior to and during the event. The study also found an increase in infectious diseases and drug-resistant microbe genes in the river water samples collected during the Mela. A new bacterium was discovered during the study.

The team led by Dr. Avinash Sharma from the National Centre for Cell Science, Pune found that bacteria belonging to certain phyla reduced significantly while the prevalence of bacteria belonging to phylum Firmicutes (known to be also associated with human skin, stools and many infectious pathogens) was nearly 95%. The study was carried out in 2015 at five bathing sites in the Godavari River in Nashik and the results were published in the journal Microbial Ecology. Samples were collected prior to and during the Mela allowing the scientists to compare the spatiotemporal changes to water quality and bacterial communities.

Besides changes in bacterial diversity and load, the study found an increase in infectious diseases and drug-resistant microbe genes in the river water samples collected during the Mela. There were elevated levels of genes related to infections such as Helicobacter pylori, pertussis,  Salmonella, Staphylococcus aureus and TB. Elevated levels of drug-resistant genes include antifolate resistance, beta-lactam resistance and vancomycin resistance, to name a few.

The water samples collected during the Kumbh Mela had much higher total dissolved solids and total suspended solids. The biological and chemical oxygen demand increased due to higher release of organic particles during the Mela compared with before the Mela. As a result, there was “substantial reduction” in the concentration of dissolved oxygen. “The substantial decrease in dissolved oxygen while the COD and BOD increased could be due to increased bacterial load in the water,” says Dr. Sharma.

Compared with skin microbiota, the faecal microbiota is predominant at one sampling site. “This site is located upstream and is a remote location and not a major bathing site. Because of this, open defecation might be more prevalent. This is my guess. We are yet to do any scientific study to ascertain the cause,” Dr. Sharma says.

During the same study, the researchers discovered a new bacterium, which they named Corynebacterium godavarianum, that showed resistance to antibiotics like amoxycillin, augmentin, cefpodoxime and clindamycin. The discovery was published in the journal International Journal of Systematic and Evolutionary Microbiology.

“Out study highlights the need to create awareness among pilgrims to avoid open defecation and maintain personal hygiene to reduce the amount of microbes that get introduced into the river. A closed system for bathing prior to taking a dip in the river should be put in place to reduce contamination of human-associated skin bacteria,” says Kunal Jani from NCCS and first author of the paper.

Besides taking a dip in the river, pilgrims also drink the holy water. “Drinking this water containing infectious disease genes and antimicrobial-resistant genes could pose serious health issues. It might be preferable to drink the holy water much upstream where fewer people bathe,” he suggests.