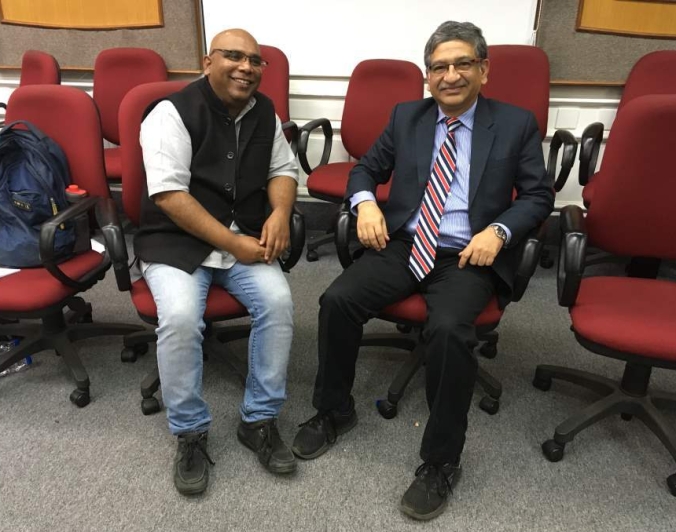 Drug molecules that behave as surrogates of progesterone hormone can be used in the case of solid tumours, say Dr. Amit Dutt (left) and Dr. Sudeep Gupta, Director of ACTREC.

Tata Memorial Centre researchers have uncovered the mechanism by which a single injection of progesterone administered prior to breast cancer surgery helps in reducing the chances of cancer cell spread (causing a relapse) whether patients have progesterone receptors or not. Since progesterone cannot be given to men and children, the results of the study can help in designing drugs that target two specific genes to modulate the cancer.

Researchers from Mumbai-based ACTREC-Tata Memorial Centre (TMC) have uncovered the biological mechanism by which a single injection of progesterone administered prior to surgery benefits breast cancer patients immaterial of whether progesterone receptors are present or not. Progesterone treatment prior to surgery reduces the chances of migration and invasion ability of primary cancer cells to other parts of the body thus reducing the possibility of a relapse.

A large clinical trial carried out by Dr. Rajendra Badwe and colleagues in 2011 at TMC found progesterone treatment prior to surgery produced beneficial effects in breast cancer patients independent of the progesterone receptor status. The  results were published in the Journal of Clinical Oncology. The mechanism behind this which was not known then has now been deciphered by a team led by Dr. Amit Dutt from the Integrated Cancer Genomics Laboratory at ACTREC, TMC. The results of the study were published in the Journal of Biological Chemistry.

While the beneficial effects of progesterone were seen in the trial, the researchers did not know how women who did not have the receptors for the hormone too benefited. The team set to unravel this. They treated breast cancer cell lines with progesterone and looked for changes in gene expression. They found two genes (SGK1 and NDRG1) were significantly produced in abundance (overexpressed) in cells treated with the hormone.

They looked at the same cells for changes in microRNAs and found the expression of a few microRNAs was reduced in response to the hormone treatment. “Of these, two microRNAs which were down regulated [decrease the quantity of protein produced] also regulate the expression of SGK1 gene,” says Dr. Dutt, who is a Wellcome Trust/ DBT India Alliance Intermediate Fellow. “The normal function of the two microRNAs is to reduce the amount of SGK1 enzyme produced. So when the microRNAs are down regulated, the amount of SGK1 enzyme produced increases.”

The team found that progesterone treatment acts in two ways — it directly increases the amount of SGK1 enzyme produced and also causes the two microRNAs to increase the amount SGK1 produced. “SGK1 is targeted by both progesterone hormone and by the two microRNAs in response to the hormone. There is a dual-phase regulation of SGK1,” says Dr. Mukul Godbole from TMC and first author of the latest paper.

The role of AP-1 genes

Studies done by other researchers had suggested that another set of genes (AP-1) regulate the expression of the NDRG1 gene. Since AP-1 genes are stress genes, it was suggestive that stress might be responsible for increased production of the NDRG1 enzyme. In this case, progesterone treatment stresses breast cancer cells and this causes the NDRG1 enzyme levels to increase. A previous study of primary tumour before and after progesterone treatment hinted at the possibility of the hormone stressing the cancer cells causing the NDRG1 levels to be elevated in the tumour. The results of this study by researchers at TMC and NIBMG, Kalyani were published in Breast Cancer Research and Treatment. “The breast cancer cell lines we studied were mimicking what was happening in the primary tumour,” says Dr. Dutt.

Since progesterone is a female hormone, it cannot be given to men and children. “But with the understanding of the molecular mechanism we can use drugs to target SGK1 or NDRG1 and increase its levels without administering progesterone hormone,” says Dr. Dutt. This becomes particularly important as the beneficial effects of progesterone on other solid tumours such as lung and pancreatic cancer can possibly be modulated by using drug molecules that behave as surrogates of the hormone.