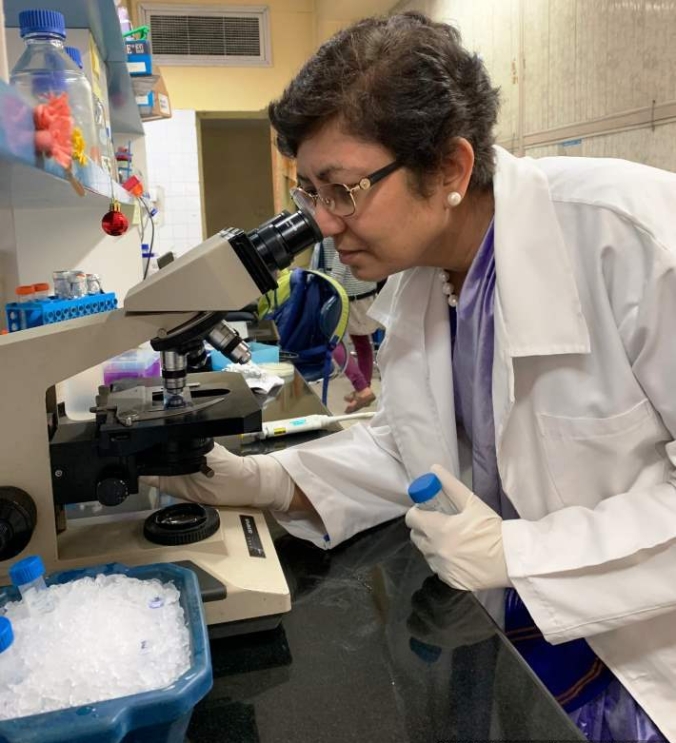 One of the repurposed drugs can be possibly used for targeting latent Mycobacterium, says Dr. Nasreen Ehtesham.

Delhi researchers have identified a protein that is vital for the formation of biofilm by TB-causing bacteria and other bacterial species. Two FDA-approved drugs (acarbose and cyclosporine-A) bind to the protein and inhibit biofilm formation. The two drugs increased the effectiveness of isoniazid and ethambutol (first-line TB drugs) 2- and 4-fold respectively. Animal trials have already begun.

A protein essential for the formation of biofilm by TB-causing bacteria (Mycobacterium tuberculosis) has been finally identified by a multi-institutional team from Delhi’s Jamia Hamdard, National Institute of Pathology and Indian Institute of Technology (IIT) Delhi. Biofilm formed by TB bacteria acts as a physical barrier to drugs thereby protecting the microorganisms. The researchers also found two FDA-approved drugs used for treating diabetes and suppressing the immune responses were able to disrupt biofilm formation by the bacteria. When the existing drugs were used along with first-line anti-TB drugs, the dosage required to kill the bacteria was drastically reduced by over 50%. To validate the promising results obtained in the lab, the team has already initiated trials on mice.

“M. smegmatis bacteria generally produce less of biofilm in response to stress. But when we added the PpiB gene into M. smegmatis, the biofilm production was 1.5-fold higher,” says Dr. Ashutosh Kumar from JH-Institute of Molecular Medicine, Jamia Hamdard, New Delhi and first author of a paper published in the journal npj Biofilms and Microbiomes. Dr. Kumar is currently at the Department of Microbiology at Tripura Central University.

Since drug development typically takes 10-15 years, the researchers turned to drug repurposing using FDA-approved drugs that can potentially bind to the PpiB protein and prevent biofilm formation by TB bacteria. Based on in silico analysis, researchers found two drugs — acarbose and cyclosporine-A — showed high binding capacity with the PpiB protein. So the two drugs can possibly inhibit PpiB protein and thereby prevent biofilm formation and make the bacteria vulnerable to anti-TB drugs. Gallium nanoparticles were also tested to study the ability of nanoparticles to bind and inhibit the protein and prevent biofilm production.

“We validated the binding property through in vitro studies. Both the drugs as well as gallium nanoparticles were able to bind very well with the purified form of PpiB protein,” says Dr. Anwar Alam from the Kusuma School of Biological Sciences at IIT Delhi and another first author of the paper. Recombinant M. smegmatis expressing TB bacteria PpiB protein were cultured in the presence of FDA-approved drugs and gallium nanoparticles to check for biofilm formation. “There was reduced biofilm formation by recombinant M. smegmatis in the presence of the drugs and gallium nanoparticles,” Dr. Alam says.

Based on the positive results using M. smegmatis, the researchers then tested the ability of the drugs to inhibit biofilm formation by TB-causing  bacteria (Mycobacterium tuberculosis). “Both cyclosporine-A and gallium nanoparticles significantly reduced biofilm formation by TB bacteria. But acarbose had relatively lesser effect,” says Prof. Seyed E. Hasnain from the Jamia Hamdard Institute of Molecular Medicine and corresponding author of the paper. He is currently on deputation at the Kusuma School of Biological Sciences, IIT Delhi.

The FDA approved drugs also increased the effectiveness of anti-TB drugs in killing TB bacteria. In the presence of anti-TB drugs and the FDA-approved drugs, the susceptibility of TB bacteria was higher. Isoniazid drug at 50% of the standard dosage was sufficient to kill TB bacteria. And 25% of the standard dosage of ethambutol killed TB bacteria. “Reduced dosage would mean less toxicity. And we presume that it can also shorten the duration of treatment, which can be ascertained only through trials,” says Prof. Hasnain.

Another significant finding is that the drug binding sites within PpiB are the same in many pathogenic bacteria that form biofilm. “Since PpiB is an essential protein, it can be targeted to inhibit biofilm formation across bacterial species. And as the drug-binding sites within Ppib is conserved across pathogenic bacteria, the protein can be targeted for disrupting biofilm production across human disease-causing microbial species,” Prof. Hasnain says.

“One of the repurposed drugs can be possibly used for targeting latent mycobacterium,” says Dr Nasreen Ehtesham from the ICMR-National Institute of Pathology and another corresponding author of the paper.