While India has set a highly ambitious target of “eliminating TB by 2025”, modelling studies published today say incidence and mortality will reduce by just 57% and 72% respectively by 2035. Ten percent of people with TB die or self-cure before presenting for care. Patient delay before first presentation for care is 4.1 months. Majority of MDR-TB cases in India is due to transmission. And only 14% of people with MDR-TB completed treatment.

Of the 10 million new tuberculosis (TB) cases reported globally in 2017 by the World Health Organisation, 2.74 million were from India, showing a marginal reduction from 2.79 million in 2016. Despite TB incidence in the country being 204 cases per 1,00,000 in 2017, the government has set a highly ambitious target of “eliminating TB by 2025”, five years ahead of the Sustainable Development Goals (SDGs) target.

But according to The Lancet Global Health article based on modelling for three high-burden countries including India, compared with 2015 data, 57% reduction in incidence and 72% reduction in mortality will been seen only by 2035. Strengthening the care cascade could reduce cumulative TB incidence by 38% in the case of India, it notes. India has to adopt measures to prevent TB on a population level to eliminate the disease in the coming decades, it adds. 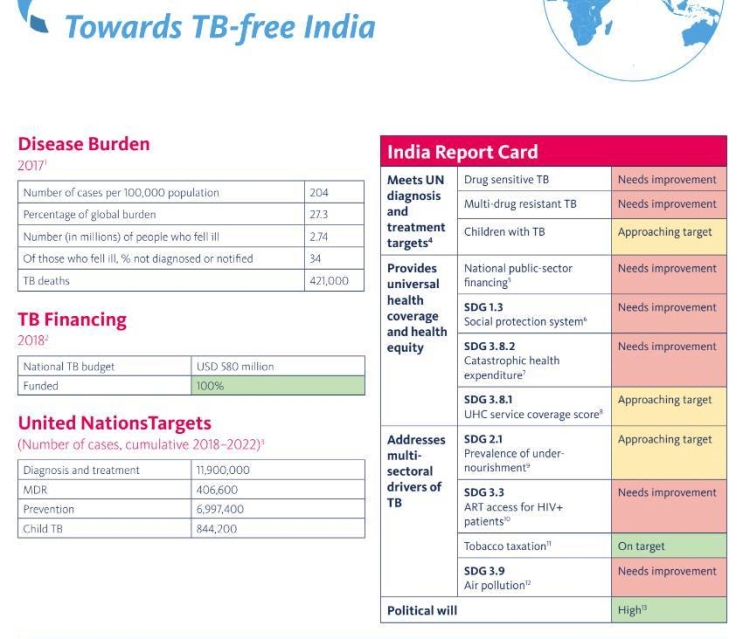 The India report card says diagnosis and treatment for drug-sensitive and drug-resistant TB need improvement. Modelling suggests that lives of eight million (28%) people with TB can be saved over the next 30 years if tests are subsidised and patients are supported to complete the treatment. “This would cost an extra $290 million each year, which is significantly less than India’s $32 billion losses associated with TB mortality each year,” it notes.

The Lancet Commission recommends that India should scale up access to TB services for all those seeking them, optimise engagement of private sector providers and guarantee universal access to drug susceptibility testing and second line TB drugs.

“India has set an ambitious goal of eliminating TB by 2025, but integration of TB services with the primary health system to reduce diagnostic delays is not happening. Patients are not diagnosed and treated at the primary level, which is the first point of contact. Only this will lead to early diagnosis and help cut the transmission cycle,” said Dr. Nalini Krishnan from the Resource Group for Education and Advocacy for Community Health, Chennai, and co-author of The Lancet Commissions on TB published today in The Lancet. “In studies carried by us in Chennai, we have seen diagnosis delay up to two months in the private sector,” she added. 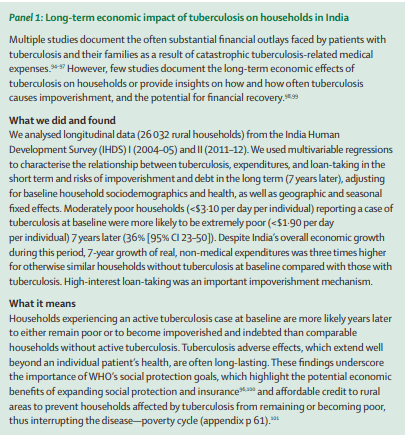 According to her, funding for the national TB control programme is encouraging, there is political will and the programme mentions all the correct initiatives to bring the disease under control. “But plenty of microplanning is needed. Implementation of the policies is far from satisfactory and accountability (both internal and at community level) is missing. Only accountability will allow course correction if things are not going well,” Dr. Krishnan said.

Some cheer on TB notification but not enough

In an accompanying Comment piece, Health Minister JP Nadda writes that in 2018, TB case notification was 2.15 million, which is 16% more than the previous year. The number of notifications by the private sector has been increasing. “Last year, 0.54 million cases were notified by the private sector, which is 35% increase compared with 2017,” he writes. While the increase in case notification may appear encouraging, it is just one-fourth of the desired number. India’s National Strategic Plan for Tuberculosis Elimination (2017–25) has called for a six-time increase in private notifications to two million patients per year by 2020.

Instead of waiting for people with TB to reach diagnostic centres for testing, India has now undertaken active case-ﬁnding campaigns to reduce the time taken to diagnose and start treatment and hence cut the transmission cycle. So far 144 million people at risk of the disease in 447 districts have been screened and more than 50,000 new cases have been detected, Mr. Nadda writes.

According to The Lancet Global Health article based on modelling studies, 10% of individuals with TB die or self-cure before presenting for care. According to the survey carried out in Gujarat, 40% of those who had bacteriologically tested positive for TB had not sought care. Patient delay before first presentation for care is 4.1 months. Even initiation of treatment after diagnosis happens after 2.1 days. The proportion of people with TB completing treatment is 85%. But it says systematic efforts to screen high-risk populations have already begun in India.

Majority of MDR-TB cases due to transmission

With 1,35,000 cases in 2017, India has the highest multidrug-resistant TB load in the world. According to The Lancet Commission report, increasing evidence shows that the majority of MDR-TB cases in India are due to direct transmission. Hence, early diagnosis and prompt initiation of effective treatment should be high priority to curb MDR-TB transmission. According to the report, in India, only 14% of people with MDR-TB completed treatment and just 11% remained disease-free at the end of one year. Yet, in the Comment piece, the Health Minister does not make a mention of how India would be tackling MDR-TB.