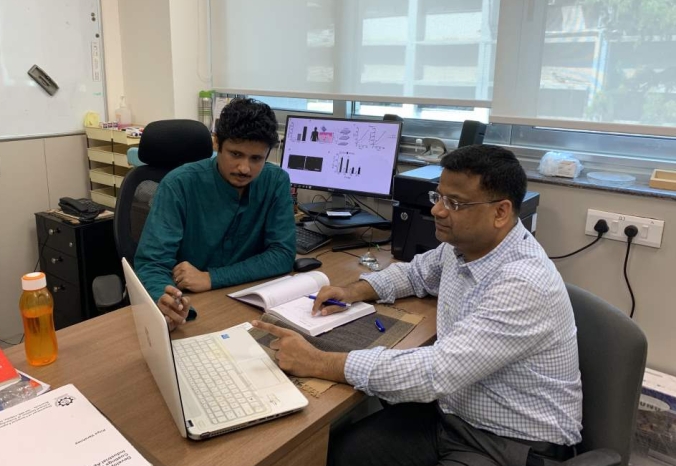 IIT Bombay team uses indigenously developed hydrogel to multiply skin cells (keratinocytes). In contrast to plastic plates where cells grew to 1 million in 10 days, the hydrogel produced 20 million. Cells grown on hydrogel could multiply for as along as 25 generations. The key is the lower stiffness of the hydrogel compared with plastic plates.

By using an indigenously developed hydrogel made of a polymer (polyacrylamide) in lieu of the conventional plastic tissue culture plates, researchers at the Indian Institute of Technology (IIT) Bombay have been able to achieve many-fold increase in the number of skin cells (keratinocytes) cultured in the lab. Unlike traditional methods, no feeder layer or drug is needed when cells are grown on the hydrogel substrate.

Rapid expansion of keratinocytes, which make up most of the skin cells, without losing the physiological functions, is essential when treating chronic wounds and burn patients. Keratinocytes for the study were supplied by Dr. Chitra Nayak of BYL Nair Charitable Hospital, Mumbai and co-author of a paper published in the journal RSC Advances.

Compared with plastic plates, cells grown on hydrogel have better physiological functions. Both wound healing and the ability to take up viruses (lentivirus), which act as a gene delivery vehicle, are better when the cells are grown on hydrogel, the team found.

The relatively less-stiff hydrogel substrate developed by a team led by Prof. Abhijit Majumder at the institute’s Department of Chemical Engineering facilitates rapid multiplication of cells. The cells could multiply up to 25 generations while those grown on plastic plates stopped growing after 12-15 generations.

Ankita Srivastava (left), Pankaj Mogha (centre), and Susant Kumar are the first authors of the paper.

“In 10 days, the number of skin cells grown on plastic plates reaches one million while cells grown on hydrogel become 20 million,” says Prof. Majumder, who is one of the corresponding authors of the paper. “There was rapid proliferation of cells and we were able to get more number of cells in less time.” Prof. Majumder is an Early Career Fellow of the Wellcome Trust-DBT India Alliance.

Besides quantity, even the quality of cells grown on hydrogel was better than cells grown on plastic plates. “Cells grown on gel were able to secrete the molecules essential for recruiting the immune cells,” says Prof. Majumder.

The key to proliferation

The hydrogel allows rapid multiplication as its stiffness is about 1 lakh times less than plastic plates — plastic plates have stiffness of 1 GPa. The team found that growing cells on hydrogel with 10 kPa and 20 kPa produced more cells than when grown on either rigid plastic or gels that are much softer (5 kPa).

The keratinocytes adhere to the substrate and tend to contract, thereby experiencing high tension (traction force). The traction force experienced by cells increases with stiffness of the substrate on which they are grown. As a result, when cultured for long, cells grown on stiffer plastic plates age faster. “Senescence is low when cells are grown on gel. That’s why they are able to multiply up to 25 generations,” says Prof. Majumder.

“Patients with burn and chronic wounds require plenty of skin cells and need them immediately. So we need a method that allows for rapid multiplication of cells with the physiological functions remaining intact,” says Prof. Rahul Purwar from the Department of Biosciences & Bioengineering at IIT Bombay and the other corresponding author. Similarly, in the case of epidermolysis bullosa skin disorder requiring gene therapy, the entire sheet of epidermis is defective and has to be replaced with epidermis containing cells with normal copy of the gene.

Keratinocytes make up more than 90% of the skin cells. Even in the case of deep burns (which are not restricted to the skin surface), covering the skin with keratinocytes helps in preventing infection and water loss. Hence, a technique that produces more cells quickly helps.

The researchers intend to carry out trials on animal models but that would depend on the availability of GMP facility and funding.