More than two weeks after making false claims on March 8 that Sanfe Period Pain Relief Roll-On, an Ayurveda product claimed to help women with menstrual pain, is FDA-approved and tested by AIIMS, the IIT Delhi start-up published a corrigendum. After being exposed by Alt News, the start-up has today apologised for misleading the media, readers and users. This episode exposes the perils of blindly believing news released even by reputed institutions.

When I get letters or mails from people claiming that they have invented something or disproved a well-established theory, I junk them without battling an eyelid. When readers or researchers call me to tell about their “outstanding” work, I politely tell them to get it published in a journal and assure them that I would be the first reporter to write about it once it gets published — but I have stopped doling out this advice ever since predatory journals spread in India. If it’s a development of a product that they are talking about, I tell them to approach a certifying organisation and get the necessary approvals and then approach the media.

I might appear inconsiderate or harsh in my assessment and reaction but how else do I handle such claims when I am not an expert and have no access to research facilities to test these claims. I am a reporter and not a practising scientist. And this approach has helped me avoid some embarrassing situations. While most newspaper and magazines reported about Ramar Pillai and his fabulous “herbal petrol” work, I stood my ground and did not report about it. I was then with the Business India magazine and the Science Editor of the magazine backed me in my decision.

So why am I saying all this now? On March 11, many mainstream newspapers (The Hindu was not one of them) carried a news item about ‘Sanfe Period Pain Relief Roll-On’ launched by an IIT Delhi start-up Redroom Technology Private Limited. The Ayurveda product is claimed to help women with menstrual pain and was launched on March 8. 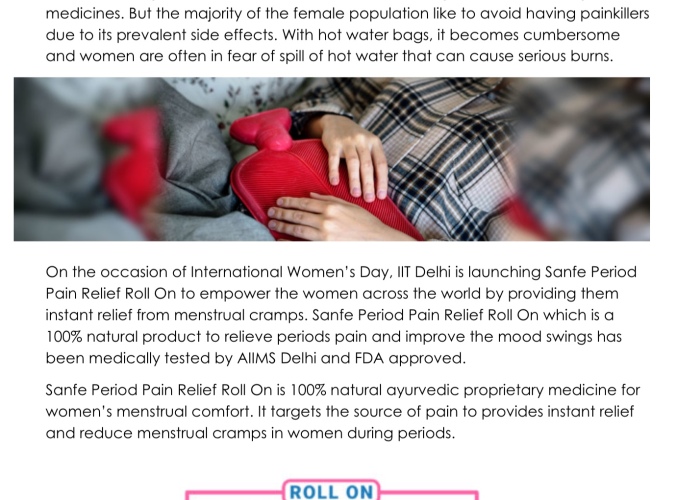 But on investigation, Sabeeh Kamil and Dr. Sumaiya Shaikh at Alt News found that the product has not been approved by FDA and it has not been medically tested by AIIMS.

The start-up published a corrigendum in The Hindu on March 28 but not once does the corrigendum categorically state that the claim made about the product being FDA-approved is wrong. All it says is: “Wherever it has been mentioned that Sanfe Period Pain Relief Roll On is a FDA-approved product, it should be considered as Ministry of AYUSH, Haryana-approved product”. However, nothing was tweeted to correct this misinformation nor the media informed about it.

It was only after Alt News contacted the start-up, information on IIT Delhi website was corrected to remove any mention of FDA approval. The March 8 tweet mentioning about FDA approval was deleted today.

A press release sent out today (April 8) by Archit Agarwal and Harry Sehrawat who are B. Tech students at IIT Delhi and Directors of the company says: “It is a factual and an unintentional mistake” to have stated that the product is FDA-approved. It adds: “The factual and the unintentional mistake was the consequence of our misunderstanding that FDA is the equivalent of Directorate of Ayush for this product. We deeply apologise for the mistake.” 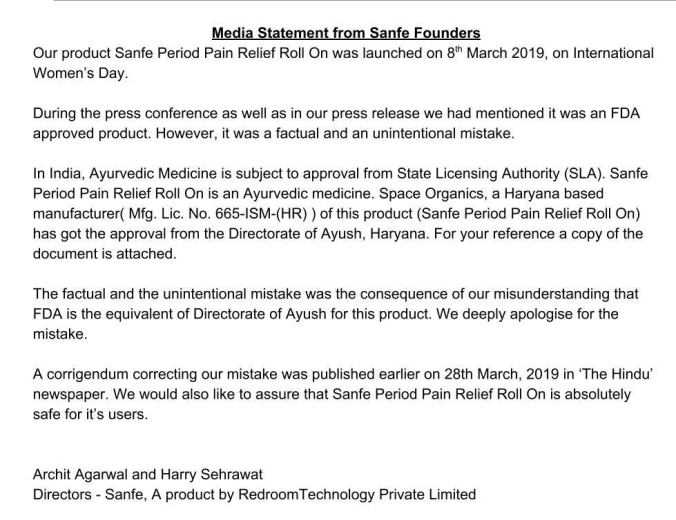 Question of credibility and trust

So how can two B. Tech students and a faculty — Dr. Srinivasan Venkataraman from the department of Design — issue a press release and post information on the website of Sanfe with such factually wrong claims? Even if the students and faculty had genuinely mistaken AYUSH approval with FDA (which appears to be nothing but an outrageous claim of innocence), what justification do they have for claiming on the Sanfe website that the product has been tested by AIIMS when it is not?

No doubt, journalists who published news reports without cross-checking facts have miserably failed in their duty and are at fault. But one of the reasons why they did so could be because of the credibility that IIT Delhi has. After all, the information was made available to the media through a press conference and an IIT Delhi press release that was released to the media by the PRO of the institute. And it is precisely this credibility of the institute that the students and the faculty misused.

“It was a mistake, a slip,” says Dr. Venkataraman. “I had a chance to look at it [press release] but did not know about it.”

But was it just a mistake or a deliberate attempt to mislead both the media and the potential users of the product? It is the overzealous or brazen attempt to hype up through false claims that leads to a loss of trust by journalists and newspaper readers. 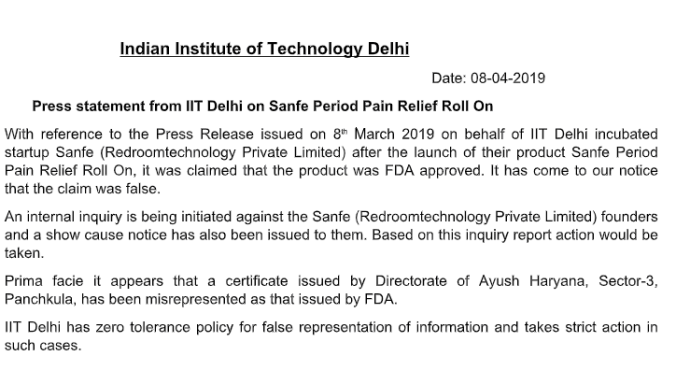 Press statement sent out on April 8 by IIT Delhi.

According to Economic Times,  IIT Delhi has already “issued a show cause notice” to the start-up for falsely stating FDA approval. “If Sanfe has provided any wrong information to the institute and has misled the public, IIT Delhi will take strict action against them. As an institute, we have zero tolerance for any such acts of misdeed,” V Ramgopal Rao, director, IIT Delhi told Economic Times.

A December 2016 paper published in PLOS ONE found that “many exaggerations were already present in university press releases, which scientists approve”. But in these cases, the press release is sent along with the published paper or to coincide with the publication of a paper and so reporters have a chance not to be misled.  Here are two famous instances where hype in press releases led to disastrous reporting.

The blog was updated an hour after it was published to include information about the show cause notice sent to the start-up.

CORRECTION – April 9: It was wrongly reported that the IIT Delhi website page had carried the incorrect claim that the product was tested by AIIMS. It was Sanfe’s website page that carried the wrong information. This has been corrected.