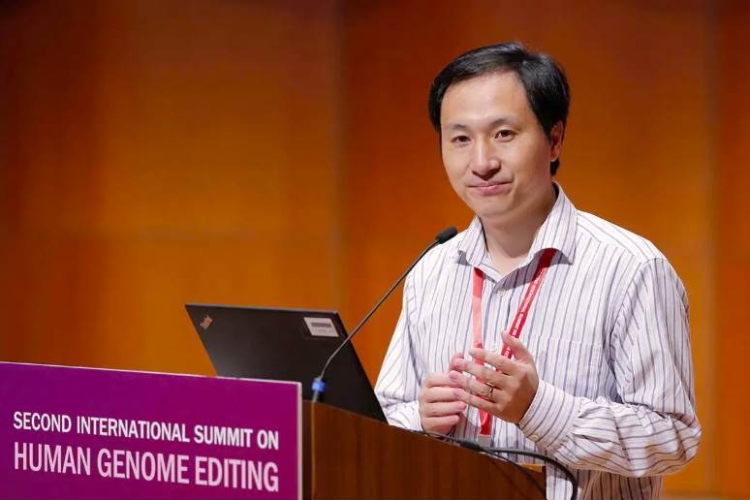 Dr. He’s experiment violates the 2003 guidelines that prohibits the use of gene-manipulated embryos for reproductive purposes. China has posted the draft regulation requiring researchers to obtain prior approval from the government before undertaking clinical trials. It is now all set to introduce the gene-editing regulation.

In a bid to make babies immune to infection by HIV, Dr. He Jiankui, a Chinese researcher from the Southern University of Science and Technology in Shenzhen, used a clinically untested gene editing tool (CRISPR-Cas9) to modify a particular gene. The tool has also been used on another woman to make a gene-edited embryo; the pregnant woman is expected to deliver the baby in August. The announcement of the birth of gene-edited twin baby girls late last year set off an international furore.

Unusual but repeated DNA structures that scientists had been observing for some time was given a name — Clustered regularly interspaced short palindromic repeats or CRISPR. Scientists discovered in 2012 that CRISPR is a key part of the immune system. For instance, when a virus enters a bacterium, it fights back by cutting up the virus’s DNA. This kills the virus but the bacterium store some of the DNA. The next time there is an invasion, the bacterium produces an enzyme called Cas9 which matches the stored fingerprints with that of the invader’s. If it matches, Cas9 can cut up the invading DNA.

Was it wrong to use the gene tool to make babies resistant to HIV?

Dr. He used the CRISPR–Cas9 gene editing technique in the twin girls to disable a gene called CCR5, which encodes a protein that allows the HIV virus to enter and infect cells.

Though no guidelines have been drawn up so far, there is a general consensus in the scientific and ethics communities that CRISPR–Cas9 gene-editing technique should not be used clinically in embryos.  There is also consensus that gene editing can be potentially used only to prevent serious genetic disorders that have no alternative treatment. While HIV cannot be cured, medicines can keep the virus under check.

Importantly, human clinical trials have not been carried out anywhere in the world to test if disabling the gene completely prevents HIV infection and what the side effects of doing so would be. In the absence of any clinical trial data and absence of any consensus to use this tool to prevent HIV infection, performing it on babies as a form of medical intervention is unethical.

According to Nature, the hospital that had supposedly given ethical approval for Dr. He to use the technique on pregnant women issued a press statement denying any approval given to him. The hospital also “questioned the signatures on the approval form” and said no committee meeting was held related to his research work.

Apparently, information on the consent form suggests that the parents who had participated in the experiment were never told about the problems of disabling the gene.

There is also the possibility that the gene editing tool could have caused unintended mutations in other parts of the genome, which may lead to unpredictable health consequences.

Most importantly, medicines and delivery through caesarean section and avoiding breast feeding can prevent vertical transmission from the mother to the foetus. While women with HIV have greater chances of passing the virus to the foetus, in this case, the mother was HIV-free and only the father was HIV positive.

Does the CCR5 gene have any protective role?

The CCR5 gene’s protective role against the West Nile virus is well established. According to Nature, the CCR5 gene also helps to protect the lungs, liver and brain during certain serious infections and chronic diseases. The gene is known to prompt the immune system to fight influenza virus in the lungs, and without this gene the defence system would fail. In the case of people with multiple sclerosis, absence of this gene makes them twice as likely to die early.

Was the gene removed in both the babies?

There are two copies of the gene in every person. In the case of one baby girl both the copies of the gene were disabled but in the other baby, only one copy was disabled. So the baby with one functional copy of the gene might still be susceptible to HIV infection. The decision to implant the embryo with only one disabled copy makes the work all the more unethical. Though he claimed the babies were born in early November last year, the New York Times reported that the babies were born premature in October.

How did the scientific community get to know about his work?

Dr. He has not published any paper in a peer-reviewed, scientific journal describing how the gene editing was done. Instead, he chose to disclose his work with the Associated Press on November 26, 2018 and posted a handful of videos. He offered some details of the work at gene-editing summit in Hong Kong two days later. Lack of transparency and casual approach while embarking on a risky and unchartered research has angered the scientific community.

Incidentally, on November 26, The CRISPR Journal published Dr. He perspective piece “Draft ethical principles for therapeutic assisted reproductive technologies”, which was retracted on February 14 this year. Dr. He and other authors had outline five principles to be followed while performing human gene editing, which Dr. He himself did not follow.

What steps have China taken to prevent misuse?

The day Associated Press broke the story, the Chinese national health commission asked Guangdong health commission to start an investigation. On January 21 this year, Dr. He was fired from the university where he worked after a probe by the Guangdong health commission found that he had violated the national regulations against using gene-editing for reproductive purposes. According to The Scientist, Dr. He’s experiment violates the 2003 guidelines that prohibits the use of gene-manipulated embryos for reproductive purposes. On February 26, China posted the draft regulation requiring researchers to obtain prior approval from the government before undertaking clinical trials. Those found violating the rules will be punished and this includes a lifetime ban on research. China is now all set to introduce gene-editing regulation.