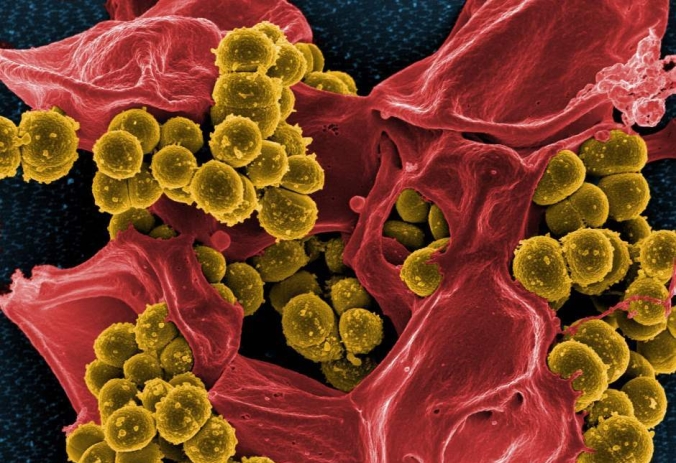 Novel protein targets that can be used by candidate drug molecules to kill antibiotic-resistant strains of Staphylococcus aureus, including vancomycin-resistant S. aureus, have been identified by researchers at the Indian Institute of Science Education and Research (IISER) Pune.

The protein targets identified are crucial for the growth and survival of the bacteria and hence S. aureus are less likely to cause mutations in them to confer drug-resistance. Any drug candidate that can bind to the targets will be able to inhibit the protein from functioning leading to eventual death of S. aureus, including the drug-resistant ones.

The researchers used a small molecule (quinone epoxide) and attached an indole residue to it to increase the ability of the molecule to cross the cell barrier of the bacteria and then bind to the proteins. “Many small molecules lack the ability to cross the cell barrier. By making the small molecular permeable, it became possible to know which proteins are crucial for bacterium’s survival,” says Prof. Harinath Chakrapani from the Department of Chemistry at IISER Pune and one of the corresponding authors of a paper published in the Journal of Medicinal Chemistry.

The small molecule was found to bind to multiple proteins, including a few that are crucial for growth and survival of the bacteria. The proteins are crucial as they bind to the DNA to activate it for normal cellular functioning.

The small molecule was found to be very specific to S. aureus and was highly potent in cell culture studies. “But in animal studies the molecule did not appear to be as potent. Nevertheless, it’s a good starting point to eventually develop an antibiotic that is effective even against multidrug-resistant bacteria, which are very difficult to treat” says Dr. Siddhesh S. Kamat from the Department of Biology at IISER Pune and another corresponding author of the paper. “Now that we have found a new small molecule that can cross the cell barrier, bind to proteins and kill the bacteria, we can always decorate the molecule with functional groups and make it more bioavailable in animals.”

The team is also screening other small molecules that can potentially be used as a candidate drug to target the specific proteins already identified.