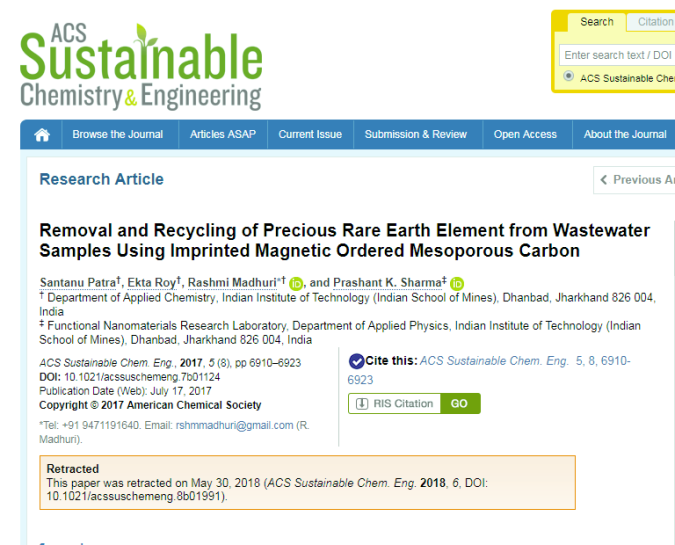 Four more papers by IIT Dhanbad faculty have now been retracted for “Duplication of images… and presenting them as different material”. The first paper by Dr. Rashmi Madhuri and Dr. Prashant Sharma was retracted in February 2018 and seven more were retracted in the last couple of months. Two more papers in Analytica Chimica Acta and Biosensors & Biomaterials have also been retracted. In all 14 papers have been retracted so far. On PubPeer, researchers have raised concerns about 25 other papers by the duo for image manipulation and duplication.

After the retraction of a paper published in the journal ACS Biomaterials Science & Engineering by Dr. Rashmi Madhuri and Dr. Prashant K. Sharma from the Indian Institute of Technology (Indian School of Mines), Dhanbad on February 7, 2018, four more papers by the same authors have now (May 30, 2018) been retracted. The four papers were published in the journal ACS Sustainable Chemistry & Engineering.

Dr. Madhuri: “It is worth mentioning that it is just a coincidence that most of the articles were published in last 2-3 years, whereas the work is the result of very hard work of our group (which has more than 10 PhD and postgraduate students), in [the] last six years.”

It is worth recalling that on PubPeer, researchers had raised concerns about 38 papers by Dr. Rashmi Madhuri and Dr. Prashant Sharma for image manipulation and duplication. Smut Clyde highlighted the concerns in detail The retraction of four more papers only confirms that these researchers were after all correct in accusing Dr. Madhuri and Dr. Sharma for unethical research practices. There is now important for journals, where the duo had published their papers, to show some urgency and investigate. 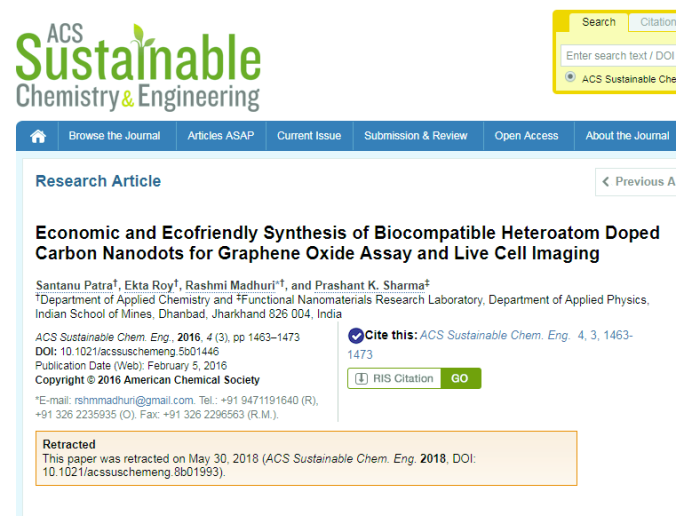 The first paper (Retraction of “Removal and Recycling of Precious Rare Earth Element from Wastewater Samples Using Imprinted Magnetic Ordered Mesoporous Carbon) that has been retracted was published online on July 17, 2017. According to the journal, the paper has been retracted due to “duplication of images” from two other papers (published in July 2016 and published in March 2017) and “presented as different materials”.

The second paper (“Anisotropic Gold Nanoparticle Decorated Magnetopolymersome: An Advanced Nanocarrier for Targeted Photothermal Therapy and Dual-Mode Responsive T1 MRI Imaging”) from where the image was reused was the one which was retracted in February this year. 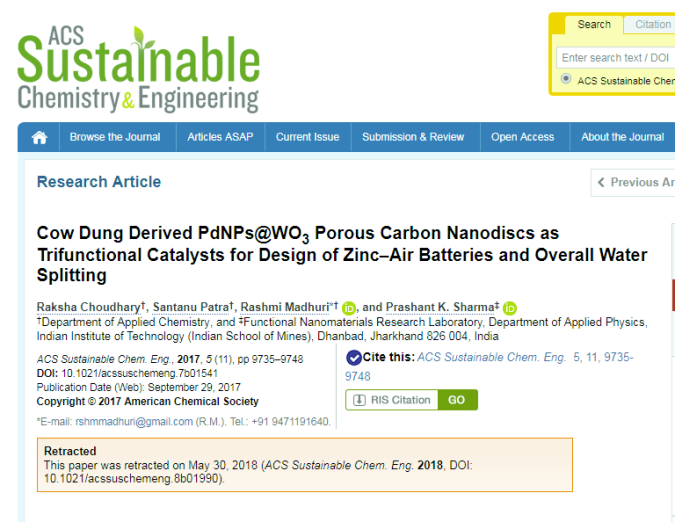 The second paper which has been retracted (Economic and Ecofriendly Synthesis of Biocompatible Heteroatom Doped Carbon Nanodots for Graphene Oxide Assay and Live Cell Imaging) published on February 2016 is again due to “Duplication of images… and presented as different materials” from three other papers (published in November 2016, published in July 2016, and published in June 2015) published by the same authors.

The third paper that has been retracted (Cow Dung Derived PdNPs@WO3 Porous Carbon Nanodiscs as Trifunctional Catalysts for Design of Zinc–Air Batteries and Overall Water Splitting) was published in September 2017. Like in earlier cases, the retraction is due to “Duplication of images… and presented as different material”. But unlike in the other two papers, the images have been taken from only one of their earlier papers published in July 2016 in the Journal of Materials Chemistry B.

The fourth paper that has been retracted (Equipment-Free, Single-Step, Rapid, “On-Site” Kit for Visual Detection of Lead Ions in Soil, Water, Bacteria, Live Cells, and Solid Fruits Using Fluorescent Cube-Shaped Nitrogen-Doped Carbon Dots) was published in August 2016. The retraction is due to “Duplication of images… and presented as different material”. The November 2016 paper from where the images were taken is the same paper from where images where used for their second retracted paper as well.

In early December 2017, Dr. Madhuri had accused scientists posting on Pubpeer as trying to defame her. “They are just posting comments without reading our papers,” she said.

And in email sent to me in mid December 2017, she had said: “We would like to mention that all our articles are published in very reputed journals, after a very rigorous and transparent review process, adopted by the concerned journals. The referees and editorial board have approved our work and published them.

“Merely by inspecting the images one cannot draw inferences that are outcome of very carefully designed and performed experiments. Therefore, it is very unscientific to comment that the images are morphed or photo-shopped, whereas all the related data and supporting files are still in possession of authors, which can be crosschecked by competent authorities, if required.”

According to Retraction Watch, seven other papers of Dr. Madhuri and Dr. Sharma were retracted a couple of months ago. The retracted papers are: 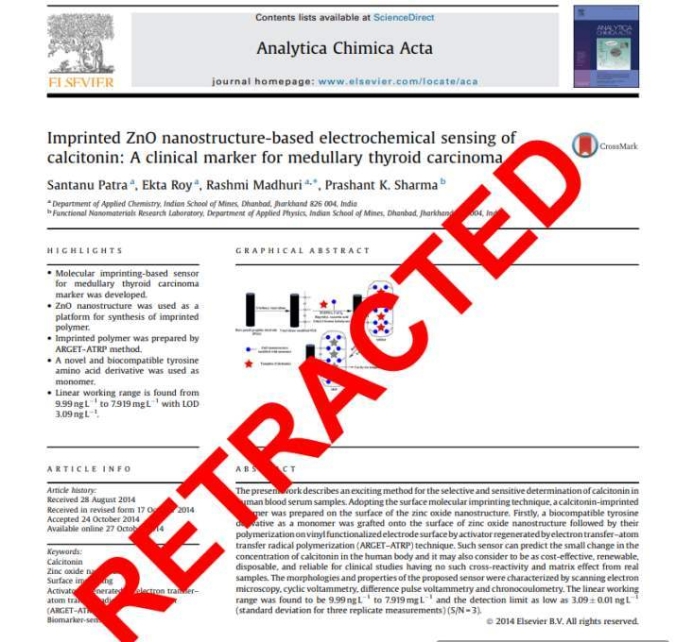 Retraction Watch Tweeted me saying two more papers of Dr. Madhuri and Dr. Sharma were retracted. A paper published in January 2015 (Imprinted ZnO nanostructure-based electrochemical sensing of calcitonin: A clinical marker for medullary thyroid carcinoma) in the journal Analytica Chimica Acta has been retracted. In the retraction note, the Editor says: “This article has been retracted at the request of the Editor following concerns raised by various readers. The article reports different electron micrographs for different sample preparations, but some images are of different areas from the same sample… These problems with the data presented cast doubt on all the data, and accordingly also the conclusions based on that data, in this publication.

“As such this article represents a severe abuse of the scientific publishing system. The scientific community takes a very strong view on this matter and apologies are offered to readers of the journal that this was not detected during the submission process.” 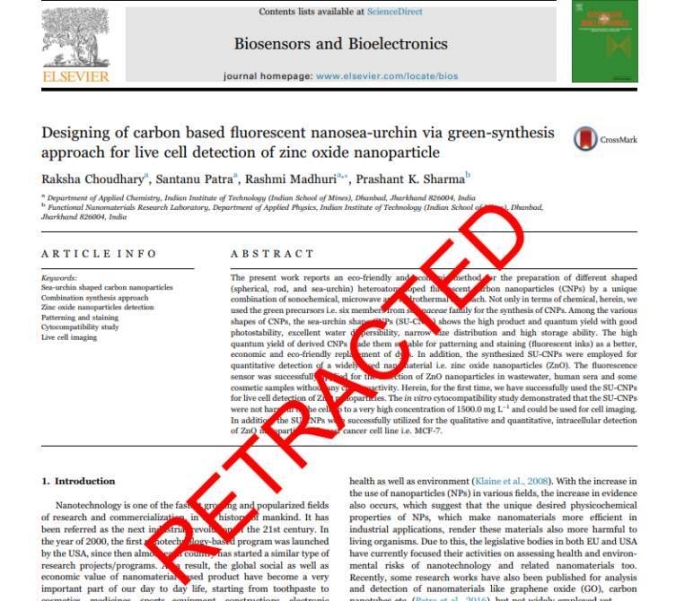 The other paper that has been retracted (Designing of carbon based fluorescent nanosea-urchin via green-synthesis approach for live cell detection of zinc oxide nanoparticle) was published in Biosensors & Biomaterials in May 2017. The retracted note says: “This article has been retracted at the request of Editor following concerns raised by a reader. There are significant concerns regarding the originality of the electron micrographs displayed in Fig. 1 (panels B-G, especially C). The concern is that these multi-particle images are comprised of copies of the same particles.

“These problems with the data presented cast doubt on all the data, and accordingly also the conclusions based on that data, in this publication.”