On February 20, China once again changed the case definition in Hubei province. All clinically confirmed cases will now be classified under suspected cases. Only molecular test positives will be labelled as confirmed.

On February 12, the number of new COVID-19 cases reported from mainland China witnessed the biggest increase for a given day when 15,152 people were diagnosed with the disease. There was also a spike in the number of deaths reported in a single day — 254. In Hubei province alone the increase in the number of cases was 14,840 and deaths shot up to 242.

The reason for the sharp increase in the number of cases and deaths was because in Hubei province officials stopped using molecular diagnostic tests to confirm COVID-19 disease and instead began counting patients based on clinical diagnosis.

“We’re seeking further clarity on how clinical diagnoses are being made to ensure other respiratory illnesses including influenza are not getting mixed into the COVID-19 data,” WHO Director-General Tedros Adhanom Ghebreyesus told a daily coronavirus media briefing in Geneva on February 14. 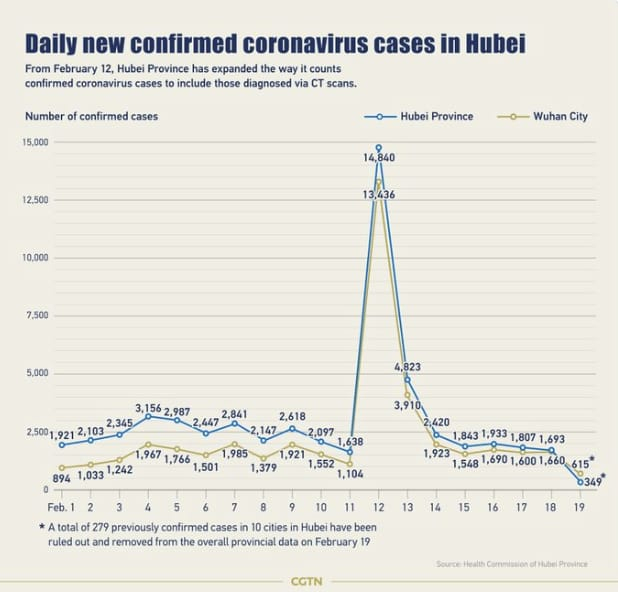 On February 20, the National Health Commission once again changed the criteria used for confirming COVID-19 cases. In Hubei province, which is the epicentre of the outbreak, clinical methods used for confirming cases will cease to exist and instead cases would be counted only when confirmed using molecular diagnostic tests.  All clinically confirmed cases will now be classified under suspected cases and will be labelled as confirmed cases only if molecular testing carried out tests positive.

Based on the new case definition, on February 20, China reported 394 new cases and 114 deaths from 31 provinces the previous day. The Hubei province alone reported just 349 cases and 108 deaths. With this, the total number of cases went up to 74,576 and deaths to 2,118.

China Global Television Network tweeted:  “279 previously confirmed cases in 10 cities in Hubei [province] have been ruled out and removed from the overall provincial data on Wednesday [February 19].”

Prior to the new case definition being applied, the number of new cases reported on February 19 was 1,749 from 31 provinces and 1,693 cases in Hubei province alone.

Molecular test to confirm SARS-CoV-2 positive case has proven to be a challenge as the test does not have high sensitivity and hence returns many false negative cases. Even when people exhibit overt symptoms, the molecular test has in several cases come out negative. It takes at least two days to process the results of the test.

“For an epidemiologist, it’s really frustrating when case definitions keep on changing,” Benjamin Cowling, a professor of epidemiology at the University of Hong Kong told The New York Times. “Why can’t they work out what’s a probable, suspected and confirmed case? It’s totally confusing.”

“To know whether the number of cases is going down or increasing during the outbreak, there should be a consistent way of measuring and reporting cases,” says Dr. Manoj V. Murhekar, Director of the Chennai-based National Institute of Epidemiology (NIE). “Whether the epidemic is coming under control or increasing cannot be assessed unless we know how many are being tested each day.”

China has so far not shared important information that might help scientists to better understand the progression of the epidemic. For instance, it releases the number of new cases each day but not when the patients became ill. Without knowing the date of symptoms onset it becomes difficult to tell if the epidemic is growing or slowing down. It also does not reveal the age of patients newly diagnosed and who are severely affected nor the number of positives among the total tested.